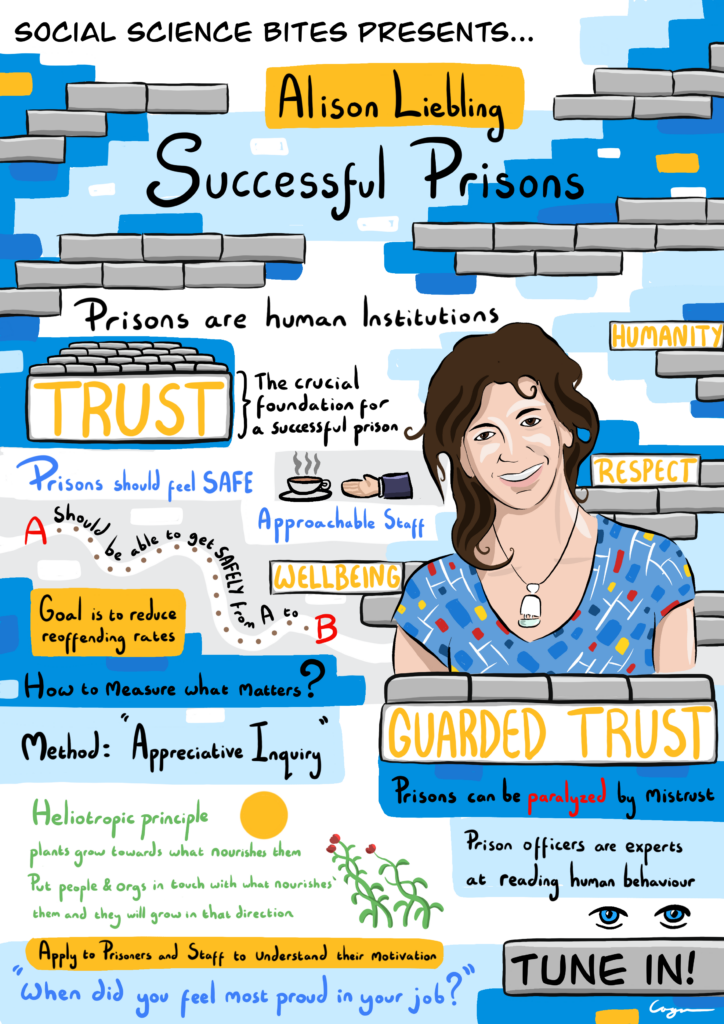 This illustration is part of a series of Social Science Bites illustrations by scientific illustrator Alex Cagan. We’ve looked through our archives and chosen some of our favorite episodes from over the years, which Alex has brought to life in these visualizations. We’ll be unveiling new illustrations in this series through August 2020 on our Twitter page. Catch each new illustration as it’s released at the hashtag #SSBillustrated and click here to view all the illustrations so far.

In determining what makes a successful prison, where would you place ‘trust’? Alison Liebling, a criminologist at the University of Cambridge and the director of the Institute of Criminology’s Prisons Research Centre, would place it at the top spot. As she tells interviewer David Edmonds in this Social Science Bites podcast, she believes what makes a prison good is the existence and the practice of trust.

As this recording makes clear, these aren’t starry-eyed recommendations from a novice observer. Liebling has years of going into dozens of individual lockups, and believes that good prisons are possible. “A good prison,” she details, “is one where prisoners feel safe and the environment is not threatening – and therefore they can concentrate on their own personal development.” That environment means inmates are “reasonably decently treated, not worried about getting from A to B, the regime works in a fairly predictable and clear way, and the staff are approachable,” among other things.

While she has met with ‘why bother?’-type resistance from hard-boiled staff and prisoners surrounding her research, her retort is quick and usually effective: “There isn’t any better method than research for authentically describing this invisible world.”

The best prisons, she says, are the ones that “see prisoners as people first.” This isn’t a prescription to be naïve, and she subscribes to what Onora O’Neill describes as “intelligent trust” in dealing with prisoners. Good corrections officers already intuit the concept, she adds: they are “subtle readers of human behavior … making fine judgements about gradations of trust.”

For her research, Liebling has adopted “appreciative inquiry,” which she came too almost accidentally while trying to discover a way to describe what works in a prison and how do prisons differ from each other.  (“It wasn’t a research tool, or at least it wasn’t until I corrupted it!” she jokes.) Just as plants follow the sun, appreciative inquiry also follows the heliotropic principle, trying to identify and then support what gives life energy to people or organizations. “So instead of telling me about your offending,” she would ask, “tell me something you’re most proud of.”

Talk about working in the prison environment (“I always felt really at home”), the idea that prisoners themselves my feel vulnerable, how to build trust, and how prison policies have improved over Liebling’s career – and how that improvement has stalled

Liebling has published several books on these topics, such as 1992’s Suicides in Prison, 2004’s Prisons and their Moral Performance: A Study of Values, Quality and Prison Life and The Effects of Imprisonment with Shadd Maruna in 2005, and Legitimacy and Criminal Justice, an edited volume with Justice Tankebe, in 2013.

Alison really understands how a prisoner feels and should be treated. I truly admire a person like Alison. I totally agree on “see prisoners as people first”. Prisoners deserve to be treated equally.

Alison is a perfect example of a criminologist. She saw goodness in every prisoner. They should be treated as a person. If I’m a prisoner, I can easily trust Alison.