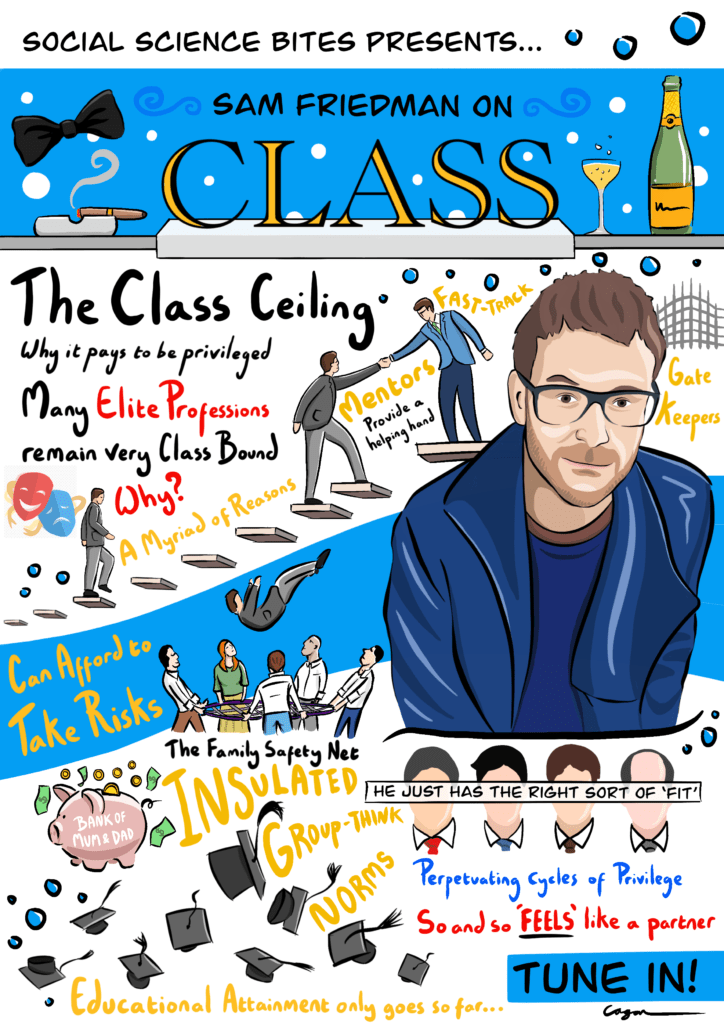 This illustration is part of a series of Social Science Bites illustrations by scientific illustrator Alex Cagan. We’ve looked through our archives and chosen some of our favorite episodes from over the years, which Alex has brought to life in these visualizations. We’ll be unveiling new illustrations in this series through June and July 2020 on our Twitter page. Catch each new illustration as it’s released at the hashtag #SSBillustrated and click here to view all the illustrations so far.

Is education, by itself, the great equalizer? Will having the same education erase the benefit someone from a higher class has over someone from a lower class? “Education,” says sociologist Sam Friedman, “doesn’t wash away the effects of class background in terms of allocating opportunities. That’s quite profound – I believe there are a lot of people who believe quite strongly that these sorts of educational institutions can and do act as sort of meritocratic sorting houses.”

Friedman, an associate professor at the London School of Economics, doesn’t deny education has some role – and some successes – in this role, but believes that education is not sufficient to achieve the goal of unbinding Britain’s class system.

Friedman tells interviewer David Edmonds in this Social Science Bites podcast that “it’s a very long and protracted discussion that we could have about the meaning of class.” He sees two ways to discuss it in sociological terms: the dominant model of what work do you do, and the Pierre Bourdieu-influenced idea of what resources — or economic, cultural and social capital — can you draw upon.

Friedman’s work tends to use that first definition: “What’s the nature of that work in terms of both your level of autonomy at work as well as your earnings potential, and what is that work’s nature.” In turn, he focuses a lot on elite professions, as suggested by the title of the book he co-authored with Daniel Laurison, The Class Ceiling: Why it Pays to be Privileged.

“You know, a lot of the emphasis in terms of understanding social mobility has tended to be on this ideas of ‘access to the professions,’” he explains. “These are traditionally an area that have been the preserve of people from fairly privileged backgrounds and there’s been a sort of enduring policy emphasis on opening them up, making those areas accessible to all based on merit, based on talent. I suppose we wanted to interrogate that in a way that was new and fresh and brought to bear new evidence.”

The goal, he adds, is to answer that question always lurking in the background of discussions by Britons about Britain: What sort of society do we live in?

One where class still affects outcomes. While that might seem intuitive, Friedman’s research has helped unpack exactly what’s going on here, even when opportunity at the educational level evens out. His metric for measuring the residual disparity in classes is the pay gap – stubborn and measurable – in which people from working-class backgrounds who do score ‘elite’ jobs make 84 percent of what their coworkers from privileged backgrounds do.

In this podcast, Freidman describes some of the reasons he’s found for the persistence, including the ability of the well-off to draw from ‘The Bank of  Mum and Dad’ throughout their lives, a financial lifeline which often gives them the flexibility to take chances that poorer colleagues fear. He also describes how sponsorship opportunities often go to not to the top performers but to people who share a cultural affinity with their potential mentor, or how behavioral codes tend to push down on people who weren’t raised to be conversant in them.

In addition to The Class Ceiling, Friedman has written widely on these issues of social mobility and inequality, including the 2014 book Distinction: The Cultural Currency of a ‘Good’ Sense of Humour. In 2015 he co-wrote Social Class in the 21st Century for Penguin. In the public sphere, he sits on the government’s Social Mobility Commission. He’s currently working with Aaron Reeves on analyzing the data contained in the 120 years of British Who’s Who listings.