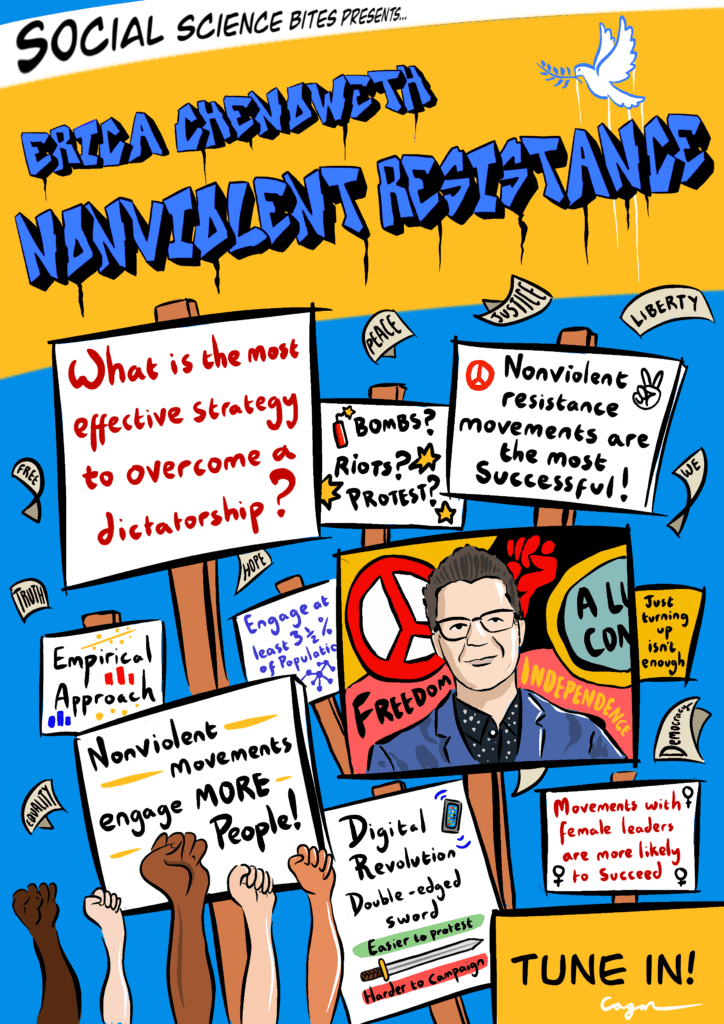 You and a body of like-minded people want to reform a wretched regime, or perhaps just break away from it and create an independent state. Are you more likely to achieve your goals by a campaign of bombings, assassinations and riots, or by mass protests which are avowedly peaceful?

Erica Chenoweth, a professor of public policy at Harvard Kennedy School and a Susan S. and Kenneth L. Wallach Professor at the Radcliffe Institute for Advanced Study, has studied this question in depth, her latest book being Civil Resistance: What Everyone Needs to Know. (And people do listen: In 2014 she received the Karl Deutsch Award, given annually by the International Studies Association to the scholar under 40 who has made the most significant impact on the field of international politics or peace research.)

Starting in 2006, she and Maria Stephan, and later other colleagues, have collected and cataloged mass movements – those with at least a thousand participants and with repeated actions—since 1900, trying to see whether violence or nonviolence help bring reform.

“Turns out,” Chenoweth tells Dave Edmonds in this Social Science Bites podcast, “that the nonviolent campaigns in the data had about a two-to-one advantage in success rate over the violent campaigns.” This isn’t to say that violent movements have never worked, or that nonviolent ones always work (they fail as often as they succeed); it is saying that nonviolence tends to work better.

One contributing factor seems to be that nonviolent campaigns are generally larger – 11 times larger, on average—than violent ones. “That allows them to activate many different elements of political power,” Chenoweth notes.

Success comes in various forms. In anti-dictatorial movements, the strongman’s departure within a year of the peak of the movement—and with the movement being an obvious factor—would be considered a success; same for kicking out an occupying power or seceding from a larger entity

Some notable nonviolent mass movements that succeeded were the Iranian Revolution (although a violent consolidation of power did follow the removal of the Shah) and the 2000 “Bulldozer Revolution” in Serbia which toppled Slobodan Milosevic.

“There are hundreds if not thousands of techniques of nonviolent action,” she explains. “It’s any form of unarmed conflict where people actively confront an opponent without threatening or directly harming them physically. So it can be a protest, a sit-in, but it can also be a strike, a withdrawal of economic cooperation (like a boycott), a withdrawal of social cooperation (like refusing to wear a certain prescribed attire).” This is a subset of civil resistance movements, what Chenoweth calls “maximalist” movements, while the bigger tent of civil resistance would include the reformist efforts or Martin Luther King, Jr. or the Suffragettes.

Chenoweth says she “errs on the conservative side” by classifying protests that involve destruction of property as violent, although she does study hybrid campaigns which are generally nonviolent but have “violent flanks,” as long as those fringe actions are not inherently adopted, or are specifically rejected, by the larger movement.

Chenoweth has worked diligently to spread her message outside of academia. In addition to her books and journal articles, she co-hosts the blog Political Violence @ a Glance, hosts the blog Rational Insurgent, and blogs occasionally at the Washington Post’s The Monkey Cage. She directs, with Jeremy Pressman, the Crowd Counting Consortium, which has examined American political mobilization during the Trump years.

Her 2012 book with Stephan, Why Civil Resistance Works, won the 2013 Grawemeyer Award for Ideas Improving World Order and the American Political Science Association’s 2012 Woodrow Wilson Foundation Award. Some of her other books include the edited volume, The Oxford Handbook of Terrorism, with Richard English, Andreas Gofas, and Stathis N. Kalyvas; last year’s  The Politics of Terror with Pauline Moore; and the 2013 SAGE book Political Violence.

Chenoweth is currently a research associate at the Peace Research Institute Oslo, a fellow at the One Earth Future Foundation, and a term member at the Council on Foreign Relations.

Communication
How to Read and Understand a Scientific Paper

Communication
How to Read and Understand a Scientific Paper

Communication
Stale to Stellar: The Truth Behind Creating an Engaging Webinar