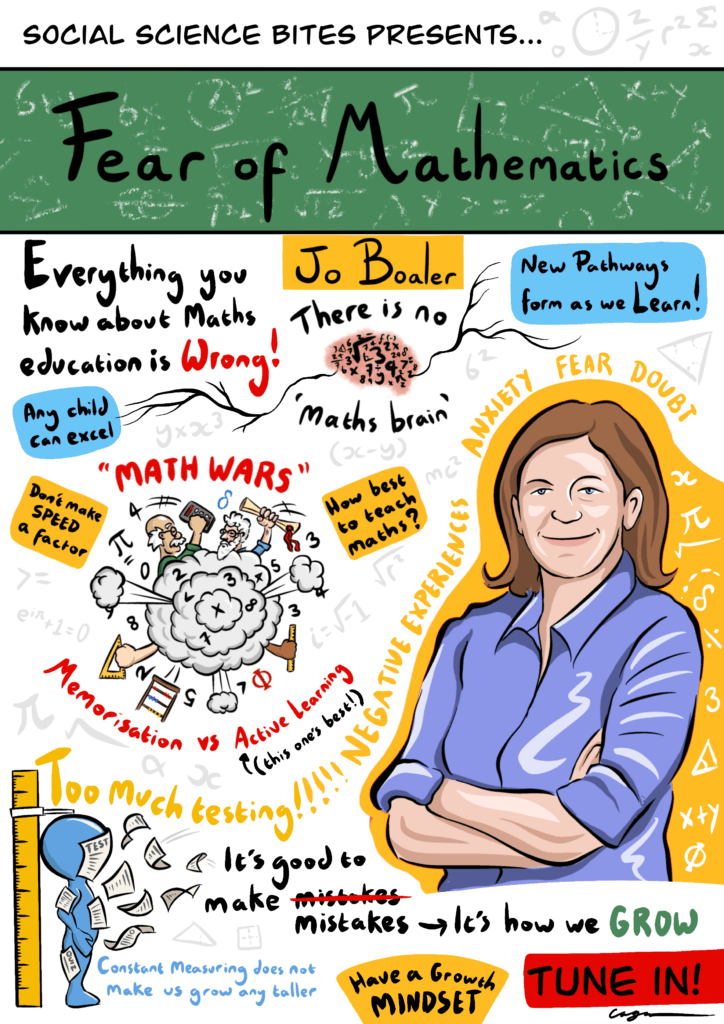 This illustration is part of a series of Social Science Bites illustrations by scientific illustrator Alex Cagan. We’ve looked through our archives and chosen some of our favorite episodes from over the years, which Alex has brought to life in these visualizations. We’ll be unveiling new illustrations in this series through August 2020 on our Twitter page. Catch each new illustration as it’s released at the hashtag #SSBillustrated and click here to view all the illustrations so far.

That some people are just naturally gifted at mathematics is pretty well accepted as conventional wisdom. With enlightened teaching we can all become adequate at math, or maths, and should set expectations accordingly. That, says Jo Boaler, who is a professor of mathematics education at Stanford University, is hogwash. Although she uses the more refined terminology of calling such thinking “a myth.”

“The neuroscience is showing us petty clearly that there’s no such thing as a maths brain, even though so many people believe that, particularly in the Western culture,” she tells interviewer David Edmonds in this Social Science Bites podcast. She doesn’t fully reject the notion about enlightened teaching, though, only the bit about merely being adequate: “If you were taught the right way … you could excel at all levels of maths in school.”

She describes how brain pathways are formed when we learn something, and the agglomeration of those pathways are what makes one adept, and not some inherent expertise. “This isn’t to say everyone is born with the same brain,” Boaler explains, “but experiences we have much more potential to shape brains than anything we’re born with. What we’re born with is really eclipsed by the millions of experiences we have.”

Her own experiences. Apart from once having been a mathematics teacher in London comprehensive schools, include following hundreds of students over many years in both the United Kingdom and the United States. Some of those students sitting in rows in traditional classrooms, others actively exploring mathematical concepts while untethered from desks. This research has enabled to bust a number of maths myths, such as that boys are better at math than girls – turns out that boys do better at testing, but not in school performance. Boaler notes that mindset plays a key role in learning, and those afraid of making a mistake don’t benefit from one of the most productive ways of learning, which is making a mistake.

In this podcast, she also details how timed tests actually inhibit the brain from working, and that even adults use (virtual) fingers in mathematics, which helps explain the link between being good at music and being adept at maths.

In addition to her role at Stanford, Boaler is the faculty director of the math teaching incubator youcubed and the author of the first ‘massive open online course’ on mathematics teaching and learning. She was also the Marie Curie Professor of Mathematics Education at the University of Sussex, a fellow at the Center for Advanced Study in the Behavioral Sciences at Stanford, and has written nine books, including the 2015 bestseller Mathematical Mindsets.