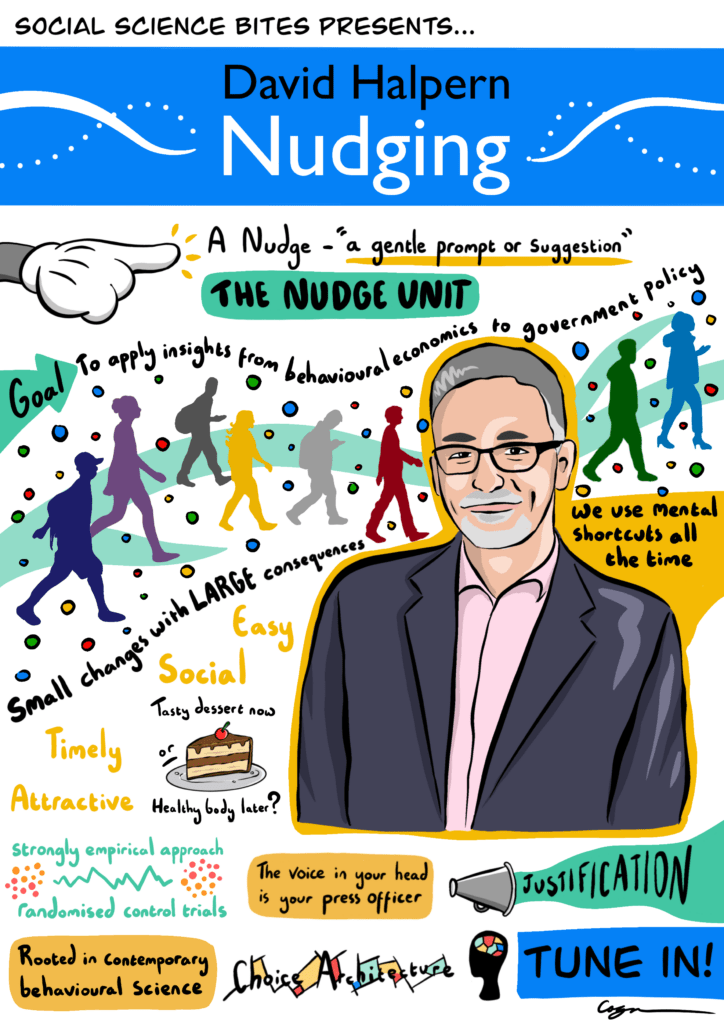 This illustration is part of a series of Social Science Bites illustrations by scientific illustrator Alex Cagan. We’ve looked through our archives and chosen some of our favorite episodes from over the years, which Alex has brought to life in these visualizations. We’ll be unveiling new illustrations in this series through August 2020 on our Twitter page. Catch each new illustration as it’s released at the hashtag #SSBillustrated and click here to view all the illustrations.

Placing more nutritious food on a more visible shelf, informing lagging taxpayers that their neighbors have already paid up, or asking job seekers what they plan to do next week (instead of what they did – or didn’t – do last week) – these are all well-known examples of behavioral spurs known as ‘nudges.’ Much of the reason such examples are known is because they emanate from the work of the Behavioural Insights Team – the so-called nudge unit. The United Kingdom’s government set up the unit in 2010 (two years after Cass R. Sunstein and Richard H. Thaler’s Nudge was published) to address “everyday” policy challenges where human behavior was a key component.

Experimental psychologist David Halpern, the unit’s chief executive, has led the team since its inception and through its limited privatization in 2014. In this Social Science Bites podcast, Halpern offers interviewer David Edmonds a quick primer on nudging, examples of nudges that worked (and one that didn’t), how nudging differs between the UK and the United States, and the interface of applied nudging and academic behavioral science.

“We tend to use mental shortcuts,” Halpern explains, “to figure out what’s going on. Now most of the time those mental shortcuts get us to where we want to go, it looks like, but they are subject to systematic error.” This can matter, he continues, because humans don’t always act in their best long-term interests, even as many policies are built on the assumption that they will.

Enter the nudge, “A gentle instrument that is not a financial incentive or a legal mandate or a requirement – a much gentler prompt or intervention.” Looking at the tax-payment nudge, he notes, “It doesn’t infringe on your basic human rights; it just reminds you that other people are more virtuous than you thought they were.” And as a result, more people pay up than would if they received a more-traditional scolding letter.

While the prompt may be low-key, the applications – and results — often are not.

“These are actually big social policy issues,” says Halpern. “My own view is you try and create almost collective mechanisms to set up. You can inject into that process an understanding of behavioral science and how people make decisions, and then we can collectively choose rather than just a few clever folks out in Whitehall or in Washington.”

He spends some time discussing the difference in nudging between those two hubs. What he terms the “North American view” the focus is on “choice enhancing, while in the UK “we take a slightly broader perspective, which is trying to introduce a more realistic model of human behavior.” This is further demonstrated by the enactment process on each side of the Atlantic. In the U.S. version of the Nudge Unit, the Social and Behavioral Sciences Team, executive orders were used to enact nudging policies that had worked in experiments. In the UK, “We went down the route of “God, we don’t actually know if this stuff works, so why don’t we run – wherever we could – randomized controlled trials.”

“Our work,” Halpern concludes, “is very hard-edged empirical. In fact, history may judge that the most important thing the Behavioural Insights Team brought was actually a very, very strong form of empiricism.”

Before leading the Nudge Unit, Halpern was the founding director of the Institute for Government and between 2001 and 2007 was the chief analyst at the Prime Minister’s Strategy Unit. In 2013, he was appointed  as the national adviser to What Works Network, which focuses improving the use of evidence in government decision making.

Describing himself as a “recovering academic” (although he does have a visiting professorship at King’s College London), before entering government, Halpern held tenure at Cambridge and taught at Oxford and Harvard. A fellow of the Academy of Social Sciences since 2016, Halpern has written or co-authored four books, including 2005’s Social Capital and 2010’s The Hidden Wealth of Nations.