When Fleetwood Mac recorded Rumours, the band was in turmoil; relationships were breaking apart, and emotions were running high. Yet the album is often considered one of their best. Recognizing the value of music and film for promoting learning, the authors of a Journal of Management Education (JME) st 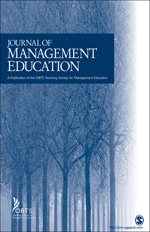 udy used a documentary about the making of Rumours to create an exercise that teaches key concepts about task groups. Debra R. Comer of Hofstra University and Robert L. Holbrook Jr. of Ohio University published “Getting Behind the Scenes of Fleetwood Mac’s Rumours: Using a Documentary on the Making of a Music Album to Learn About Task Groups” in the August 2012 issue of JME. To see the Table of Contents, click here.

From the perspective of management educators, the most useful video in this series chronicles the making of Fleetwood Mac’s (1977) Rumours. The story behind the production of this album centers on the effects of the breakups of John and Christine McVie’s marriage and Lindsey Buckingham and Stevie Nicks’s long-term relationship on their professional collaborations and exemplifies key concepts affecting task groups, including intragroup conflict, group cohesiveness, task and maintenance roles, norms, and group effectiveness…. As Liedtka (2001) advised, video cases work especially well to document interpersonal behavior and offer students “a more realistic kind of messy complexity than traditional [written] cases” (p. 411). Yet creating (taping and editing) one’s own commercial-caliber video may be prohibitively costly in terms of time, labor, and money. Indeed, inasmuch as this professionally produced video focuses on Fleetwood Mac’s group processes and outcomes, it is uncannily suited for the management classroom.

Click here to read more. To get information about the Journal of Management Education, please follow this link.

Are you interested in receiving email alerts whenever a new article or issue becomes available online? Then click here!