Read the review by Robert A. Mittelstaedt of the University of Nebraska, Lincoln, forthcoming in the Journal of Macromarketing and now available in the journal’s OnlineFirst section:

Although I lived in much of the era when The Great Atlantic and Pacific Tea Company (A&P) was the largest chain (grocery or otherwise) in the United States, I was in my mid-thirties before I ever shopped in one of their stores. And it was not very impressive—about 4,000 square feet of crowded shelves and dimly lit aisles. Notable at the time, and sticking with me to this day, were the checkout stations. Instead of moving belts, 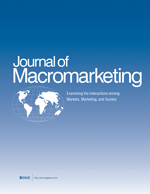 they had a counter onto which one placed one’s purchases and the checker pulled them toward the register using a U-shaped contraption made of wood. It was 1968, but it felt like stepping back into another time.

By then A&P was in decline. The chain that once had over 16,000 stores and did over 10 percent of all the grocery business in the country was on its way to its present size, a few hundred stores in the Northeastern United States, many of them operating under different names.

Marc Levinson, PhD, author of five books, and former writer and editor for Time, Newsweek, and The Economist, tells the story of the rise and fall of this giant.

Read the full review here, and browse the current issue of JMK by clicking here.