Dr. Jordan, together with Niro Sivanathan of London Business School and Adam D. Galinsky of Northwestern University, published “Something to Lose and Nothing to Gain: The Role of Stress in the Interactive Effect of Power and Stability on Risk Taking” in the December 2011 issue of Administrative Science Quarterly.

The New York Times (Tabuchi, April 26, 2012) recently highlighted a strange political choice made in Japan. The city of Yubari, Japan is desolate – virtually free from young people and full of shuttered businesses and schools. Based in the coal-mining industry, Yubari was once a bustling city but its population has fallen 90 percent since the 1960s. Any local tourism that the city once enjoyed was decimated by the 2011 tsunami. The troubles facing Yubari are endemic to many

parts of Japan. For example, the population of Japan is expected to fall by one-third in less than 50 years. And its debt is two-times the size of its economy – making it the largest government debt burden in the world. Faced with such daunting challenges, you would think that the residents of Yubari would choose a seasoned professional to run the city – perhaps someone like the 46-year-old candidate Yukari Ijima – a former national parliamentarian. But no. In Yubari’s recent election, the residents chose 31-year-old, Naomichi Suzuki, who had absolutely no experience in the political arena. One might chalk this decision up to the chaos that accompanies political elections and fickle social preferences. However, based on research that my co-authors (Adam Galinsky of Northwestern University and Niro Sivanathan of London Business School) and I recently published in Administrative Science Quarterly, we suggest that this risky choice is a function of the declining power being experienced by the people of Yubari.

Both having and lacking power have pervasive effects on human behavior and thought. Research has demonstrated, for example, that in contrast to the powerless, the powerful are more likely to take action (Galinsky, Gruenfeld, & Magee, 2003), less likely to empathize with others (Galinsky, Magee, Inesi, & Gruenfeld, 2006), and more likely to be goal-directed in their behavior (Guinote, 2007). But power is often not an either-or state. From the political to the business realm, people rarely possess absolute power or powerlessness – rather, their power is in a state of flux. Yes, individuals can have absolute power (e.g., a dictator) or powerlessness (e.g., a member of India’s former untouchables caste). But individuals can also be in dynamic states of unstable power and powerlessness. This concept can be witnessed in the political elections currently taking place throughout the United States. Mitt Romney’s power as the front-runner for the Republican Party only became evident as the primaries progressed. 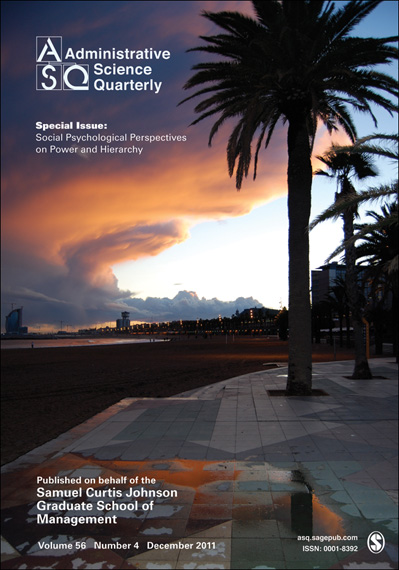 Our research shows that it is those who are in positions of unstable power and stable powerless who are most likely to take risks. Across three studies we demonstrated that the powerful unstable and the powerless stable are more likely than their stable and unstable counterparts to show risky preferences for their organization’s future, make riskier plays in a blackjack game, and act with greater risk when their money is at stake. But why?

The answer about the mechanism behind this relationship can be found in the jungle. Research by Stanford anthropologist, Robert Sapolsky, tells us that within non-human primate hierarchies, it is the powerful (i.e., the alpha males) who show less risky behavior than the powerless – like initiating aggression against other group members. But this is only when the group’s power hierarchy is stable. When the hierarchy is in flux, then it is the powerful primates who display the more risky behavior than their less powerful counterparts. Sapolsky and his colleagues explain these behaviors in terms of stress. When a hierarchy is stable, it is those in low-power positions that must constantly vie for adequate amounts of food and access to mates. However, when the hierarchy is unstable, it is the powerful who experience the most stress because they must defend their current positions of supremacy. This is key because it is stress that often leads to more risky behavior. Our research has found that humans act very similarly to their non-human predecessors – individuals in our experiments who were assigned to powerful unstable and powerless stable roles in the laboratory showed faster heart rates (i.e., a physiological sign of arousal) than did those who were assigned to powerful stable and powerless unstable roles. We also found that the mere manipulation of stress also lead to greater risk taking. If these effects manifested themselves within fifteen minutes of time in a laboratory, one can only imagine the implications of these roles in real world contexts where there are constant reminders of one’s power level and the stability of that power.

Read “Something to Lose and Nothing to Gain: The Role of Stress in the Interactive Effect of Power and Stability on Risk Taking“ in the December 2011 issue of Administrative Science Quarterly (ASQ). To learn more about the journal, please follow this link.

You can get email alerts whenever a new ASQ article or issue becomes available online by clicking here.

1 week ago
687
Communication
Watch the Video: What’s Next for #AcademicTwitter?

1 week ago
687
Communication
Watch the Video: What’s Next for #AcademicTwitter?

2 weeks ago
658
International Debate
The Covid Pandemic in France: A Review