A blog post arguing that treating all Muslims as threats plays into the hands of ISIS and another showing a time lapse map of slave-ship sailings from Africa to the New World were among the winners of this year’s Duckie awards. The Duckies, more formally known as the International Studies Association’s Online Media Caucus awards, originated in 2013 with the Duck of Minerva world politics blog and excellence online. 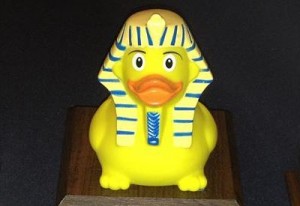 The prize for best collective blog went to the Monkey Cage, which is currently part of the Washington Post. Key contributors to the blog, named after the H.L. Mencken quote that “democracy is the art of running the circus from the monkey cage,” include John Sides, Henry Farrell and Marc Lynch, all of George Washington University; Andrew Gelman of Columbia University; Joshua Tucker of New York University; Erik Voeten of Georgetown University; Kim Yi Dionne of Smith College; and Laura Seay of Colby College. Its managing editor is E.J. Graff of Brandeis.

The best individual blog was also primate-related, Jay Ulfelder’s Dart Throwing Chimp. Ulfelder is political scientists working as an independent consultant. The best podcast series was Foreign Entanglements, which resides in the bloggingheads.tv community and is hosted by Matthew Duss and Robert Farley.

Awarded as post of the year was “Want to help the Islamic State recruit? Treat all Muslims as potential terrorists,” by Richard W. Maass, an assistant professor of political science at the University of Evansville. The post appeared at Monkey Cage. The prize for best visual post went to “The Atlantic Slave Trade in Two Minutes,” which included an animated timeline and appeared at the online magazine Slate. The authors, Andrew Kahn and Jamelle Bouie, are Slate’s assistant interactives editor and chief political correspondent respectively.

Two Twitter feeds, those of Erin Simpson and of Adam Elkus, were honored as best Twitter accounts.

Lastly Charli Carpenter, a human security analyst at the University of Massachusetts Amherst, was honored for special achievement in online media. She has, among other things blogged at Ducks of Minerva; Lawyers, Guns and Money; and The IR Blog.

The Duckies are sponsored by SAGE (the parent of Social Science Space).