For the first time since 2005, a social scientist has won the Alan T. Waterman Award, the nation’s highest honor for early career scientists and engineers bestowed by the U.S. National Science Foundation.

Kristina R. Olson, a social and developmental psychologist at the University of Washington, is also the first psychologist to ever receive the Waterman award and the woman to receive it since 2004. The award, established in 1975, comes with a grant of $1 million over five years for scientific research or advanced study in any field of science, NSF Director France Córdova will introduce her at an event hosted by NSF and the National Science Board in May.

The prize committee recognized Olson for her innovative contributions to understanding children’s attitudes toward and identification with social groups, early prosocial behavior, the development of notions of fairness, morality, inequality and the emergence of social biases. The award focuses on promising people who have already excelled; candidates must either be 40 or younger or have received their Ph.D. in the last 10 years.

“The history of scientific discovery reveals many examples of the important role the social sciences can play in enhancing our health, security and national prosperity,” said by Gary May, chair of the prize committee and chancellor of the University of California, Davis. “Kristina Olson’s research on bias has been identified as enlarging our perspective on how people, cultures and nations relate to one another. She was a unanimous choice for this prestigious recognition.”

The Association for Psychological Science, which nominated Olson for the award, saw a larger benefit to the honor. “This award also highlights the exciting and important work being done in basic psychological science, and will inspire scientists in the early stages of their career to continue their efforts to explore the fundamental processes and mechanisms underlying human behavior,” said Sarah Brookhart, the executive director of APS.

Olson said her work is important for all major societal issues — from trade disputes to health disparities to international relations. “I believe it is impossible to solve any large-scale social issues without documenting, understanding and ultimately bridging differences in people’s racial, cultural, gender and other identities.”

For Olson, understanding the attitudes of adults starts with understanding the attitudes of children. As a young child attending elementary school, Olson noticed some of her peers were treated better or worse based on socioeconomic status, race, religion, ability and national background. Her early experiences fueled her interest in how people “divide the world into social groups of us and them.”

She was particularly interested in using cognitive, social and developmental psychology to study the origins and development of such biases in young people. That focus drove her to many notable discoveries. Among them, she found that children believe people have what they deserve — they see groups with fewer resources as deserving fewer resources. Moreover, Olson’s research also found the mere existence of inequalities can cause children to develop prejudices and biased behaviors.

In 2013, she organized and began leading a 20-year longitudinal research study of early childhood gender development. The study currently follows more than 1,000 children aged 3-12 from 45 U.S. states. The project will enable researchers to track social and behavioral influences on health, and evaluate the importance of childhood identity and the support children receive to lifelong health and well-being.

“While we are still in the early stages, I believe this work has the possibility of changing society’s understanding of gender and identity,” Olson said. 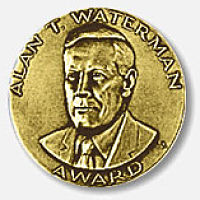 Although many of her findings are relatively recent, pediatricians are already using them to educate families and the public about social and health issues related to gender diversity.

Olson received an NSF Graduate Research Fellowship as an undergraduate at Washington University in St. Louis, from which she graduated in 2003. She earned a doctorate in social psychology from Harvard University in 2008 and currently serves as an associate professor and associate chair for the University of Washington’s Department of Psychology.

The last social scientist to receive the Waterman was sociologist Dalton Conley of New York University in 2005. The last woman was bioengineer Kristi Anseth of the University of Colorado, Boulder, in 2004.