The rise of managerialism and its impact on academic work has been much debated in scholarly research. On the one hand this research documents academics’ strong ideological opposition to more muscular management styles, but on the other it notes their compliance. However, research has not adequately explained why academics have not resisted the managerialist logic that has permeated universities.

Here we present a case study which, for us, explains the reasons behind academics’ compliance with managerialist imperatives. We liken academia to a game, which illuminates that, under managerialism, academics are in competition with each other for just a handful of permanent positions, and as such they focus on accumulating the capital (publications, teaching scores, grant income, and so on) which will allow them to secure a permanent role. Second, the metaphor of the game enables us to recognize that academics have bought into this competition, thus becoming complicit in their exploitation. Instead of resisting the demands placed upon them, academics primarily complied and openly challenged management only when an unfavorable evaluation was perceived to be jeopardizing their chances for promotion. In that regard, our findings point to a paradox. The same game, which necessitates collective organisation among academics for successful resistance, is the very same game which, by pitting colleagues against each other, makes collective resistance difficult.

We base the above arguments on a recent case study of a regional Australian university which underwent significant changes, the most important being the introduction of performance appraisals which primarily measured academics’ research output. This represented a significant break with this institution’s past as a teaching college. Additionally, the university collapsed Levels B (Lecturer) and C (Senior Lecturer) to one of Assistant Professor. Newly appointed Assistant Professors were on seven-year contracts and offered a continuing position only if at the end of their contract they were successfully promoted to Associate Professor (Level D).

Initially, these changes were met by a 25% exit of the academic population. Many of the staff who chose to exit were nearing retirement; however, we argue that their choice to leave the university reflected their relative lack of power in the new institution or their limited aspirations to remain within the changing field. While we were not able to interview the staff that left, long-serving members of the university argued that the reforms were rigorously applied and had the effect of disadvantaging excellent teachers who were not research-active.

To replenish this exodus, the university hired a significant number of early-career academics (ECAs) who were also offered seven-year-long Assistant Professor contracts. ECAs were not perturbed by the somewhat precarious nature of their employment, despite warnings by the trade union as a number of them had much shorter contracts with previous employers (12 months or less). Thus, competition in the market has almost forced academics to acquiesce to the university’s demands. It could be argued that the predominance of ECAs in the workforce made them more vulnerable to the new rules: having never experienced anything else, it is understandable that they accepted the game and played by its rules. 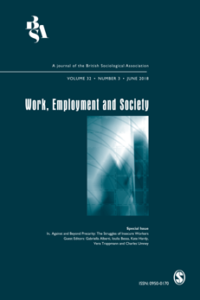 Compliance with the new requirements was evident in numerous ways. For example, the unstated expectation was that only an outstanding rating was acceptable in the performance appraisal and a satisfactory one was considered failure. This led to a significant decline in collegiality: according to Roxanne, who at the time of the interviews was Acting Head of Department, ECAs developed “tunnel vision”, directing all their efforts towards publications. As expected, compliance led to a culture of overwork and burnout, exemplified by Medeia’s response to our question about how she managed the requirements of her role: “what else do you do on weekends?”

Only limited examples of academics openly challenging management were identified, mostly relating to perceived unfairness in the appraisal. For example, Hermione (Assistant Professor) challenged the panel’s decision to downgrade her in the community engagement criterion and succeeded in receiving an outstanding evaluation after involving the HR department. However, these vocal forms of resistance appeared to challenge not the principle but the operation of the system.

While overt resistance was not a realistic option for staff at the university, neglect or silence were more common. This did not signify interviewees’ support of the system, but represented the safer option. One such example was disengaging from the VC’s Town Hall meetings, which academics did not attend due to lack of time and a general disinterest in big picture items. Hermione claimed the forum was a waste of time: “in the end, those with power have power. We’re not going to change them by standing there shouting at them”.

Though we do not wish to suggest that academics are passive recipients of managerial change, our case study shows that their resistance is rather limited “as it acts to ameliorate – rather than to overthrow – managerialism”. From such a perspective, interviewees’ actions represent symbolic violence and thus the case study begs the question: is it inevitable that in choosing compliance, academics become neoliberal subjects, “enterprising selves bidding for external research funds and manically producing research ‘outputs’”? If we are all invested in the game, has our complicity left us with exit as the only option for resistance? If not, then who can resist – in terms of levels of seniority, gender, or even age – and how?

This work also raises significant questions about resistance in the academy. We suggest that unions might not be powerful enough to subvert the managerialist logic. Being mindful of the limitations of consultative committees in challenging managerial prerogative (Barnes and MacMillan, 2014) and despite what on the surface appears to be an elaborate participative system, in practice these appear to operate more as avenues for managers to express their voice and for employees to listen rather than genuine participation structures. The findings suggest that there is a need for other avenues for facilitating challenging voices.

1 day ago
198
Communication
How ChatGPT Could Transform Higher Education

1 day ago
198
Communication
How ChatGPT Could Transform Higher Education

1 week ago
1173
Public Policy
Watch the Webinar: The Cost-of-Living Crisis