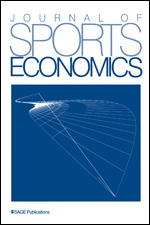 In today’s management world, the growing consensus holds that transparency is good for any organization. But a study in the Journal of Sports Economics (JSE) – noting that sports are a “useful setting in which to examine phenomena that are of broader significance”—offers other findings.

Eric Zitzewitz, Associate Professor of Economics at Dartmouth College and Research Associate at the National Bureau of Economic Research, published “Does Transparency Reduce Favoritism and Corruption? Evidence From the Reform of Figure Skating Judging” on May 2, 2012 in JSE. To view other OnlineFirst articles, please click here.

Professor Zitzewitz explains in the abstract:

Transparency is usually thought to reduce favoritism and corruption by facilitating monitoring by outsiders, but there is concern it can have the perverse effect of facilitating collusion by insiders. In response to vote trading scandals in the 1998 and 2002 Olympics, the International Skating Union (ISU) introduced a number of changes to its judging system, including obscuring which judge issued which mark. The stated intent was to disrupt collusion by groups of judges, but this change also frustrates most attempts by outsiders to monitor judge behavior. The author finds that the “compatriot-judge effect,” which aggregates favoritism (nationalistic bias from own-country judges) and corruption (vote trading), actually increased slightly after the reforms.

To learn more about the Journal of Sports Economics, please follow this link.

Are you interested in receiving email alerts whenever a new article or issue becomes available? Then click here!