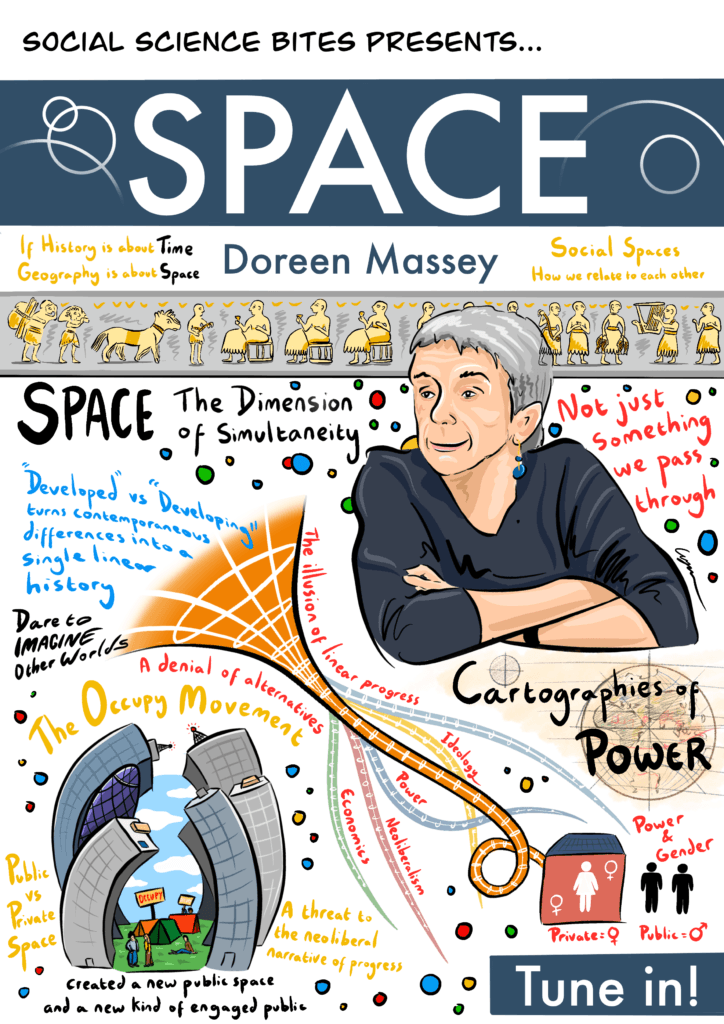 This illustration is part of a series of Social Science Bites illustrations by scientific illustrator Alex Cagan. We’ve looked through our archives and chosen some of our favorite episodes from over the years, which Alex has brought to life in these visualizations. We’ll be unveiling new illustrations in this series through June and July 2020 on our Twitter page. Catch each new illustration as it’s released at the hashtag #SSBillustrated and click here to view all the illustrations so far.

David Edmonds: Doreen Massey has made her reputation by studying space, not outer space, space here on planet Earth. Professor Massey is a geographer who wants us to rethink many of our assumptions about space, including the assumption that it is simply something we pass through. She believes that an analysis of spatial relations between, for example, people, cities, jobs, is key to an understanding of politics and power. Nigel Warburton: Doreen Massey welcome to Social Science Bites. Doreen Massey: Hello. Thank you. Nigel Warburton: The topic we are going to focus on is space. Now, some people might think that that’s a topic for physicists or architects, why is it a topic for geographers? Doreen Massey: I think the immediate way to respond is that if history is about time, geography is about space. What I do in geography is not space meaning ‘outer space’, or space meaning ‘atomic space’, or any of that; it is space as that dimension of the world in which we live. Whereas historians concentrate on the temporal dimension, how things change over time; what geographers concentrate on is the way in which things are arranged- we would often say ‘geographically’, – I’m here saying ‘over space.’ Nigel Warburton:So, in your own work about space what do you focus on? Doreen Massey: Right, well one of the things in the sense was anger: I got really annoyed with the rest of the social sciences, and indeed with philosophers, paying so much attention to time. And space became a kind of residual dimension: it’s always ‘time and space’. So time is the dimension of change, and of dynamism, and of the life we live, and all the rest of it; and space became the dimension that wasn’t all of that. And a lot of us, I think, implicitly think of space as a kind of flat surface out there  -we ‘cross space’ –  and space is therefore devoid of temporality: it is without time, it is without dynamism, it is a kind of flat, inert given. Foucault wrote in the later part of his life that, yes, he thought we’d often been thinking of space like that and that was wrong, and I agree with Foucault in that later moment.

2 days ago
199
Resources
Video: Social Influence in the Age of COVID

2 days ago
248
Insights
The Sociology of Psychologies: What is It and Why Does It Matter?

Just stumbled upon Doreen Massey’s work through a short facebook posting. “Whereas space is material: it is the land out there. But there’s a dimension of space that is equally abstract and just a dimension, so that’s the way in which I want to think about it.” Exactly! The dimensional reality of ‘Space’, or ‘Spaces’ (realms of quality) is profound. (And also I am not simply referring to the space component of ‘spacetime’ or Euclidean 3-space). From the principles of dimension theory, expressions of potentiality in spaces transforms the nature of those spaces, whether physical, or mind spaces, or other… Read more »

2 days ago
199
Resources
Video: Social Influence in the Age of COVID

2 days ago
248
Insights
The Sociology of Psychologies: What is It and Why Does It Matter?