Editor’s note: We are pleased to welcome András Tilcsik of the University of Toronto and Christopher Marquis of Harvard University, whose article “Punctuated Generosity: How Mega-events and Natural Disasters Affect Corporate Philanthropy in U.S. Communities” was published in the March 2013 issue of Administrative Science Quarterly.

When Los Angeles hosted the Olympic Games in 1984, the level of charitable contributions by locally based corporations increased dramatically and stayed at an unusually high level for over half a decade. When a city hosts the Super Bowl, associated events like fundraising breakfasts and charity golf events support a range of local nonprofit causes, and locally headquartered corporations tend to play a key role in such initiatives. And when a natural disaster strikes a city, local firms often contribute substantially to the rebuilding of the local community and its nonprofit sector—unless they themselves are also devastated by the disaster.

Much research has shown that despite increasing globalization, longstanding characteristics of geographic communities (such as their persistent traditions, norms, and networks of relationships) have a powerful enduring influence on organizations. There is increasing evidence that, even in this era of globalization, knowing where a firm is headquartered remains key to understanding its strategy, governance, innovation, corporate social practices, and various other outcomes and activities. This is an important paradox of our time, and researchers have made great headway in understanding it. 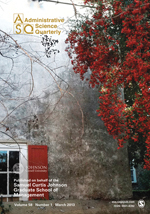 But considering examples like those above suggested to us that a key mechanism by which communities matter was missing from the picture: the impact of major local events that shake up the life of communities—and of the locally headquartered organizations. For example, whether a firm is headquartered in Atlanta, New Orleans, or Detroit matters not only because of the enduring differences between these cities but also because these cities were the sites of major one-time events, such as Hurricane Katrina or the 1996 Summer Olympics. Geographic location matters because it determines whether and when organizations experience such large-scale (and sometimes destabilizing) events.

We studied this in the context of corporate philanthropy because corporate giving is a very locally focused activity even among large firms, which presents an intriguing question: What happens to the philanthropic giving of locally headquartered firms when a major event disrupts the life of a geographic community, such as a metropolitan area?  We studied the impact of both planned mega-events (like the Olympics, the Super Bowl, or political conventions) and destructive natural disasters (like hurricanes, earthquakes, and floods).

While prior research suggests philanthropic contributions are fairly stable over time, we found that both mega-events and disasters led to dramatic fluctuations in the charitable giving of locally headquartered firms. Mega-events generally had a positive impact, and in some cases, this effect began in anticipation of a mega-event and continued for several years even after the event. During such periods, local nonprofits saw a marked rise in the charitable contributions they received. Over time, however, the effects of even the most powerful mega-events tapered off. The impact of natural disasters was more complex and depended on their magnitude: while the most destructive disasters depressed charitable giving, smaller-scale disasters stimulated it. We also found that some of the event effects were especially strong in cities with a cohesive local business community and among firms with a prior history of generosity. These findings are consistent with our larger theoretical framework, which suggests that major local events matter by influencing both normative expectations and community networks that underlie corporate philanthropy.

We hope that our work will inspire further research on the impact of local events on organizations and, more broadly, on the persistence of local influences in an age of globalization. This research also has implications for important public issues. There is an intensive urban policy debate about the impact of hosting mega-events in cities; this study provides new evidence relevant to that debate. Likewise, in the wake of major disasters like Hurricane Katrina and Hurricane Sandy, scholars, policymakers, and the public are still looking to understand the full social and economic impact of these devastating events. This study provides direct evidence about a previously understudied aspect of such events, exploring their effects on corporate charitable donations and the health of the local nonprofit sector.

András Tilcsik is an assistant professor of strategic management at the Rotman School of Management. His current research focuses on the institutional context of organizational decisions, with a particular emphasis on decisions about financial resource allocation and employment practices. He received his Ph.D. in organizational behavior from Harvard University.

Christopher Marquis is an associate professor in the Organizational Behavior Unit at the Harvard Business School. His current research focus is the sustainability and corporate social responsibility strategies of global corporations, with a particular emphasis on firms in China. He received his Ph.D. in sociology and organizational behavior from the University of Michigan.