It’s dangerous to be an elite. Consider the high-profile scandals surrounding politicians’ personal lives, and the intense scrutiny that celebrities face. A new article in Administrative Science Quarterly examines the hazards of high status and offers implications for organizational research, using Britain’s 2009 parliamentary expense scandal as an example: 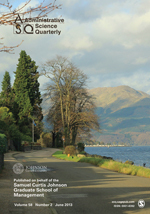 In the present research we explore the hazards that initiate elites’ falls from grace. By hazard we mean potential dangers or risks facing elites that can imperil their privileged positions.

We assess two such hazards in this study. The first, elite opportunism, is the tendency for high-status actors to over-exploit their advantage through self- interested activities that eventually undermine their position and perhaps even violate social norms or legal strictures. The second, elite targeting, occurs when elites are more scrutinized than non-elites for the same behaviors and are held to higher standards of conduct….

[W]e take advantage of an unexpected discontinuity in a governmental bureaucracy to measure both an individual’s propensity toward opportunistic behavior as well as the repercussions of such behavior. Our empirical context is a highly publicized organizational scandal that arose during May 2009 from the unexpected release of confidential expense claims made by members of the House of Commons of the British Parliament (MPs). We examine whether MPs with higher social status were more likely to abuse the expense system and/or were more likely to suffer negative repercussions for their expense claims.