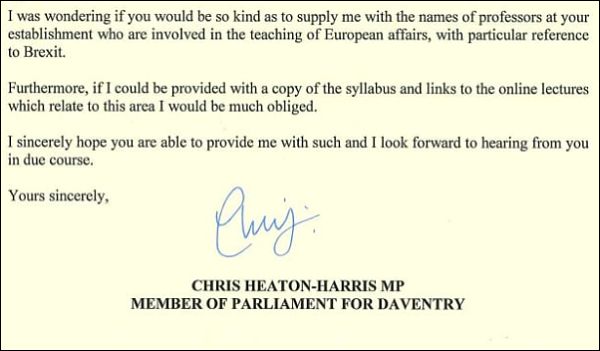 Last week, much media attention was devoted to a letter in which Chris Heaton-Harris MP asked the vice chancellors of all British universities to name academics teaching on Brexit and disclose the content of their classes. To my knowledge, no vice chancellor acquiesced. Instead, some, most notably the University of Worcester’s David Green, turned to the media. Somewhat predictably, the issue drew much media attention, both in Britain (1, 2) and internationally (1, 2, 3). There was much talk about incipient McCarthyism among the pro-Brexit political right, and Heaton-Harris’s initiative was publicly disowned by some leading figures in the Conservative Party.

The affair resulted in a brief public debate about the consequences which Britain’s impending departure from the EU will have for academic freedom in the country. However, this week, public debate is already concerned with completely different matters.

This lack of lasting public interest in threats to academic freedom is lamentable. The apparently rather censorious mindset of a hardly known MP is not of particular concern in this context. Universities reacted quite robustly to Chris Heaton-Harris’s enquiry, and vice chancellors spoke out publicly in defense of academic freedom (1, 2). The problem lies elsewhere, in issues of academic governance of which the British public seems hardly aware and in which the British commentariat seems to have hardly any interest. Simply, the most serious threat to academic freedom in Britain today is the transformation of its universities into businesses.

Among policy makers, journalists, the general public, academic managers and, to a much lesser extent, academics, the view has become dominant that universities serve two purposes. First, they are meant to contribute to economic development and growth. Second, they are meant to train Britain’s labor force, equipping students with skills that will serve them in the job market and providing other businesses with the well-prepared workers they need. Other considerations regarding universities’ role in society have faded away and gradually become irrelevant. Thus, for instance, the mentioned brief public debate about Brexit McCarthyism saw vice chancellors strategically deploy arguments about universities’ importance to civic life and the need for unfettered intellectual debate. However, similar considerations about universities’ contribution to the formation of a well-informed and critically-minded citizenry are either absent from contemporary higher education policy papers and management manuals, or they are paid lip service at best. The Humboldtian university has been replaced by Universities PLC.

This has concrete consequences for academic freedom. It means that academic enquiry, both on the part of professional academic and of students, increasingly comes to be untied from considerations about politics, citizenship and social justice. To be sure, at least some universities continue to be highly politicized spaces, and at least some students continue to engage in vigorous political activity through and alongside their studies, as the recent heated debates about no-platforming and safe spaces have shown. However, all this is threatened by a powerful counter-discourse that envisions students as consumers and academics as purveyors of economically useful knowledge. British universities today approach students as potential or actual sources of revenue. Prospective students are treated to glossy prospectuses and flashy websites that promise an enjoyable student experience. Among current students, that student experience is then frequently assessed through student satisfaction surveys and a range of other techniques to measure customer satisfaction.

If marketing becomes the primary avenue of communication between students and universities, intellectual rigor becomes problematic, and academics’ engagement with their students may come to be constrained by commercial, rather than intellectual considerations. Thus, a colleague who teaches at a leading British sociology department recently told me that she had been strongly discouraged from giving her students more to read than an article every two or three or four weeks, lest her student satisfaction scores drop. Universities’ preoccupation with customer satisfaction in a highly competitive ‘industry’ may thus end up curtailing students’ intellectual development, without them even becoming fully aware of the problem.

At the same time, professional academics today frequently are the recipients of far-reaching and invasive performance management strategies, employed by their managers to ensure that a range of institutional targets are met, from student satisfaction scores to grant capture, number of publications and so on. One purpose of such performance management is to ensure that departments and universities do well in a range of rankings and league tables and demonstrate superiority in competition with other departments and universities.

Another purpose is quite simply the direct generation of money through research, for example in the form of research grants. In Britain, academic managers have devised a whole new terminology to address these concerns, and talk about grant capture, impact factors and REF scores may comprehensively divert attention from the intellectual dimensions of scholarship. Does it really still matter whether your article was about Britain’s widening class divide or the recipe for octopus pudding, as long as it has been published in a highly ranked journal and is cited often enough?

This transition to an instrumental and economically driven approach to scholarship is sustained, of course, by the threat of job loss, as academic employment contracts are now frequently tied to the achievement of specific performance targets. At the same time, mindful of their brand image, British universities have in at least some cases used administrative tools such as tone of voice policies to punish scholars who have publicly spoken out against these new commercial realities. Of course, intellectual life at Britain’s universities continue to be vibrant, and many academics are deeply involved in civic life. Nonetheless, the outlined threats are real and pressing, and there is an urgent need for a thorough public debate on academic freedom and universities’ role in society.