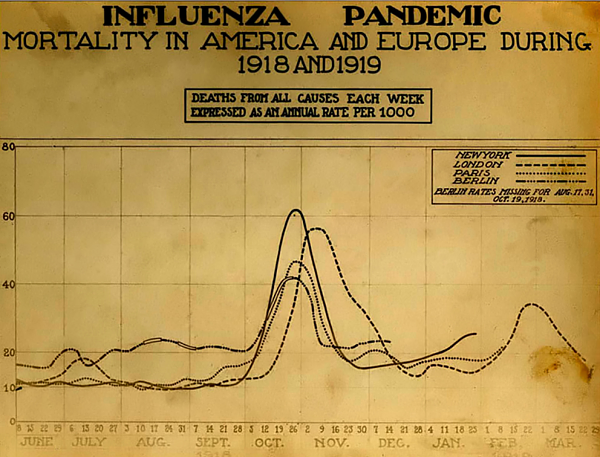 Many countries will, this year, be commemorating the centenary of the end of the First World War. 2018 is, however, also the anniversary of an event that killed many more people and had an equally dramatic impact. It is, though, less likely to feature in civic ceremonies or public memorials.

The ‘Spanish flu’ emerged during the spring of 1918 with the first wave of infection lasting into July. It returned again with a vengeance in the autumn. A third, lesser, wave appeared in the spring of 1919 and there are suggestions of a fourth wave in 1920 – the famous sociologist Max Weber may well have been a victim. In the UK alone, at least half the population are likely to have experienced the illness and almost 250,000 people died. This compares with about 700,000 UK military deaths in the whole of the 1914-18 war. Globally, it is generally accepted that at least 60 million people died, and there are good reasons to think that the true figure may be nearer to 100 million, around 2 percent of the world population at the time.

The influenza virus still presents many scientific puzzles. In 1918, nobody even knew that viruses existed – they were not identified until the 1930s. Influenza viruses occur in about 20 species. Most of them are no threat to humans. There is, though, some interchange between the human virus and those that affect birds and pigs. The way that these viruses are structured means that their genetic material is unstable. It drifts in small ways from year to year. Occasionally, there is a shift, which is a more radical change. This is what seems to have occurred in 1918 – and again in 1957, 1968 and 2009.

No-one knows for certain where the shift in the virus first took place. Rival theories locate this in China, in the US Midwest and in the British army camp at Étaples in France. By the spring of 1918, though, it was ravaging both the German and the Allied armies. The virus probably shortened the war because the German Spring Offensive in March and April ran out of fit soldiers just as US troops began arriving. Although the Americans also suffered dreadfully from the influenza, especially on their troopships, there were so many of them that this had less impact on their ability to fight.

The losses among fit young men (and women) were a distinctive feature of the 1918 pandemic. Mostly influenza kills the very young and the very old. In 1918, there were also high death rates among adults in their twenties. This seems to have been due to an over-reaction by their body to the infection. Their lungs were so badly affected that their skins turned heliotrope, a distinctive shade of blue or lilac, from lack of oxygen and they died within hours.

Globally, the impact was often more severe. Some remote communities of indigenous peoples were completely wiped out, notably in Alaska. A few Pacific islands were able to quarantine visitors and escaped entirely. Some historians think that the pandemic played a significant role in the foundation of African liberation movements. The lack of any effective medical response undermined the myth of technological superiority that the colonial powers had created around themselves. Colonial administrations focussed resources on Europeans and largely abandoned local people.

What did this mean in practice? Hucknall, a small town in Nottinghamshire, usually had about 170 burials each year: in November 1918 alone it had over 105. The gravediggers could not keep up and extra workers could not be found. In the US, the city of Philadelphia had to pay medical students to collect bodies left in the homes where they had died for six to eight weeks during the summer. Steam shovels were brought in to dig trenches in which they could quickly be buried.

Throughout the UK, Europe and North America, there are reports of disruption to postal deliveries, telephone exchanges, transport systems, banks, and courts. Mines and factories were reduced to minimal staffing levels. Hospitals overflowed into emergency accommodation, while nurses fell sick in large numbers. Many schools closed for several weeks as teachers succumbed.

There were moving individual stories. Many pregnant or nursing women died, taking their babies with them. There are numerous accounts of neighbours finding a young man, his wife and their small baby all dead together. In Nottingham, a church window is dedicated to the memory of a bride who died on her honeymoon. Hardly a family would have been untouched by disease or loss.

The experience of the pandemic had a major impact on the scientific and public health communities. However, the wider social consequences have been airbrushed from history. This was not really a question of wartime censorship as some historians have suggested. The experience was well-represented, especially in local newspapers. It has, however, not been preserved in national memories in the same way as the Great War. Some writers suggest that the trauma was just too great.

The 2009 influenza pandemic was a lucky escape in the relatively mild nature of the infection and the low mortality rate. Next time we may not be so fortunate. Perhaps it is time we had some public memorials to the other dead of 1918 to remind us that this hazard is still out there.