“In last 2 wks, startling number of academics at different unis have told me they’re trying to: move country, leave academia, go part time, take early retirement—or have quit trying to get academic job. Many who feel unable to take these options describe feeling desperate, trapped.” This recent tweet, from Felicity Callard, a history professor in London, has provoked a flood of endorsements.

It is widely accepted that there is a growing crisis of morale in UK universities, particularly but not exclusively, among early career scholars and scientists. The nationwide strike over proposed changes to the older universities’ pension scheme in February was both a symptom and a demonstration of this crisis. As academic and professional staff mingled on picket lines during some brutal weather, they discovered shared discontents and a common cause against the managerialist regimes imposed on their institutions in the last decade. A cadre of senior academic and professional managers seemed to have become decoupled from the teams they purported to lead. There was an increasing gulf between this clique, who enjoyed high salaries, good pensions and secure working conditions, and a growing number of early career staff on short-term and contingent contracts, with low pay, little employment security and limited prospects of permanency. Academic life had become “Uber-ized.”

If we treat this solely as a crisis of “morale”, though, we are in danger of missing the problem’s structural roots. University HR departments are promoting a rash of courses on mindfulness and self-care, with the occasional Pilates or yoga class thrown in for good measure. This does nothing to address the impact of marketization, which universities cannot do much about, or the Ponzi scheme of PhD and postdoctoral work, which they could do something about.

Marketization, and its accompanying audit culture, are changes in the environment of large public institutions like universities that are mostly beyond their capacity to influence. As individuals, we can develop the skills of ceremonial compliance – filling in forms to produce expected results – and possibly create some space to criticize the regime. Beyond a certain level, however, institutional leaders have very little choice but to comply with the requirements of politicians and civil servants. To do otherwise would simply risk the legitimacy and resource base of their organizations. It is the sad fate of any university that depends largely on public funding. If we have created a governing class that has no concept of effective management, the problem lies not in our stars but in ourselves.

We can, though, take more responsibility for the Ponzi scheme. Classically, this is a fraud where early investors benefit from the payments of those who join later – but eventually the scheme has enrolled everyone who can be brought in and collapses because there is no money left to pay the latecomers. My own early career saw the first UK iteration of this. I finished my PhD in 1974 and there were virtually no tenure-track hirings in sociology until the late 1980s. The US saw something similar in the 1950s, when recruitment dried up after rapid post-war expansion. In both periods, the PhD cohorts were relatively small and the problems less visible. A few people hung on in marginal positions until the job market improved again, while others left for careers outside the academy. Personally, I spent nearly 20 years with rarely more than three years’ security at any point, and often as little as six months.

The difference today is that the pool of PhDs and postdocs has expanded far more rapidly than the long-term career opportunities in higher education – although this is still held out as a legitimate expectation for most of them. Marketization plays some part in this – when income is so closely related to the preferences of high school leavers, universities need flexibility to adjust rapidly to changes in student demand. Contingent faculty really are like Uber drivers. However, this is laid over the slow-burn issue of a structure for research that has grown for decades on assumptions about the disposability of postgraduates, research assistants and research fellows. All are sold a vision of a glorious future that few will ever achieve – only around 5 percent will ever get a permanent academic post. 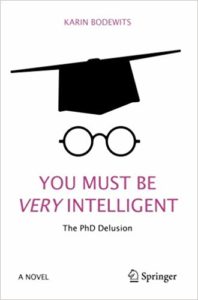 The consequences are nicely captured in a recent, semi-autobiographical, novel by Karin Bodewits, who was a PhD student at the University of Edinburgh. You Must Be Very Intelligent is not exactly a roman à clef but the world it portrays is entirely recognizable – for social sciences and humanities as much as for the life sciences in which she worked. The principal investigator in her lab is semi-detached and clueless about supervision and management. Some of the postdocs are helpful but generally the lab is marked by competition and bitching. Her PhD makes progress mainly because of the support of an old-school professor, who is one of the few sympathetic characters – but clearly on the way out. Along the way, she experiences various kinds of abuse and sexual harassment.

There is a degree of underground solidarity among the graduate students in the faculty and the citizens of Edinburgh are kind and supportive. By the end of the book, however, she has decided that this is not a world that she wants to join: “And so it goes on, unchecked, oppressive, soul-gnawing, enervating little slave empires run by tin-pot paranoiacs preying on gullible, hopeful, dreamy youth.”

This is a particular view and, as a work of fiction, it perhaps has no responsibility to consider the sources of some of the pathology it chronicles. If principal investigators are the survivors of dysfunctional experiences, then it may not be too surprising that they tend to reproduce them. I have seen labs where students and postdocs are nurtured and encouraged – and labs where they are shouted at and bullied. At the end Karin leaves for a different career.

Why would we ever think it was a bad idea for there to be a number of bright and well-educated people with PhDs following successful careers outside the academy? What is more of a problem is when those people are leaving as a result of bad experiences – “noble science deployed as a guise,” as Karin puts it. This is reinforced by the effortless entitlement of many academics in dismissing those who make different choices as failures, people who just could not hack it in a tough world. It is time for a reappraisal of postgraduate and postdoctoral work as elements in the creation of portfolio of skills that open many career tracks. They are not primarily about cheap academic labor but personal and professional development.