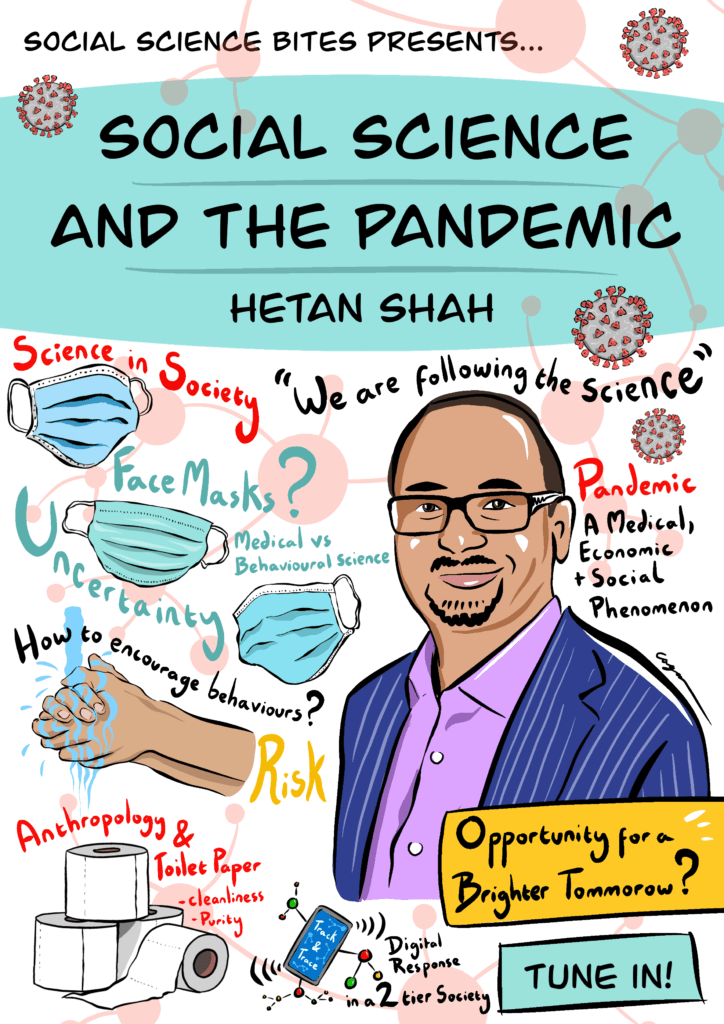 The current pandemic has and will continue to mutate the social landscape of the world, but amid the lost lives and spoiled economies in its wake has come a new appreciation of what science and scientists contribute.

“You don’t have to go back many months,” says Hetan Shah, the chief executive of the British Academy, “for a period when politicians were relatively dismissive of experts – and then suddenly we’ve seen a shift now to where they’ve moved very close to scientists.

In this Social Science Bites podcast, Shah details how science, and social science in particular, has come to be deployed, how it’s been a force for good throughout the COVID-19 pandemic, and how it can help policymakers understand and shape a better tomorrow.

Arguably, even before coronavirus the British Academy, a national body of humanities and social science scholars, has served in similar roles. In addition to its well-known body of fellows, the academy funds new research and serves as a forum to discuss humanities’ and social science’s role and impact beyond academe. Shah took the reins of the academy in February, having headed the Royal Statistical Society for the eight years previous.

Given that his time at the Academy roughly mirrors COVID’s arrival on the world stage, he’s had to hit the ground running. “It’s also been very interesting to see the government using the term, ‘We are following the science.’”

“There isn’t a single monolithic thing called ‘The Science,’” Shah explains, adding, “I think governments have recognized that the pandemic is not just a medical phenomenon but a social and economic one.”

But even within the subcommunities of science there’s no single ‘Answer’ to any given challenge. “It does feel to me the public has seemed to cope quite well and understood the level of uncertainty of the science. It’s an argument for treating the public as grown-ups.

“We are making decisions at speed. That data are limited and being gathered as we speak. This is how science happens. There may well be settled science on these matters [someday] – but that might take really quite a lot of time.

“This is why none of us envy our decisionmakers. They’re having to make decisions on imperfect knowledge.”

Even without those capital-A answers, established social science has been deployed to good effect already, Shah says.

“Anthropologists who wouldn’t have been surprised at all by the panic buying of toilet paper. They have known for a long, long time, rooted in the work of people like Mary Douglas, the cultural and symbolic importance of things like cleanliness and security in times of crises. “

As other examples he offers the campaigns detailing how best to wash your hands, the crafting of the United Kingdom’s economic package along needs rather than party lines, and how to enforce social distancing. It was social science that shows that rather than shaming – in essence, promoting — the few people who are breaking rules, compliance increases if you praise those who are keeping the rules. And social science also helps address wicked problems that predate COVID but which now have new facets, such as the unequal impact the disease has on ethnic minority communities.

There’s even a lesson in how science gets applied, he suggests. Like those anthropologists …  “[A]nthropology seems like it’s for other people — ‘Other people have strange customs; we’re normal in the West and what we do is normal’ – but I think the key is to bring an anthropological lens to our own behavior. What are the practices that we have and how can we change them?”

Arenas like critical thinking and psychology are also brought to bear tellingly on the home front: “Our leaders share our biases,” he tells Edmonds, before detailing a number of logical traps policymakers and the populace currently share.

The podcast closes out with a look to the future, both through specific initiatives Shah is part of, and in general. “I think there will be all sorts of fascinating data about how the pandemic has affected us,” including, he made clear higher education and academic research itself. Shah, meanwhile, is acting chair of the Ada Lovelace Institute, which while looking at technical solutions to COVID also draws on social science insights, i.e. in digital contact tracing, it was revealed that those most vulnerable to COVID were also least likely to have a smart phone.

And the British Academy itself, he noted, has a group of scholars assembled who will provide a rapid response to government inquiries and needs, as well as looking at some of the other implications of the future “that the government doesn’t have the bandwidth for.”