We were inspired to work on this topic due to an eye-opening incident at an advisory board meeting of an EMBA program one of the authors was a member of. The manager of that EMBA program suggested giving a high-end branded fountain pen to every alumni who would recommend this EMBA program to friends and 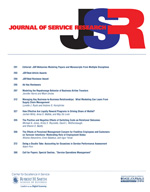 colleagues who then would apply to the program.  To the manager’s (and author’s) surprise, the EMBA advisory board was up in arms over this proposal.  They were unanimous in stating that they want to help the program, are not in this for any kind of benefit, would recommend the program already anyway to potential participants they considered suitable, and importantly, would definitely not want to be seen to benefiting in any way from their friends’ and colleagues’ potential joining of the program. The author was familiar with the word-of-mouth literature and knew that there was hardly any research that would explain such a negative reaction to a benefit offered to current customers.  This triggered the interest to dig deeper, which then started this stream of research. The rationale of the paper and its findings are explained below.

Today, many service firms operate Referral Rewards Programs (RRP) because they assume such programs will attract new customers, in analogy to what happens with word-of-mouth (WOM) recommendations. At first glance, incentives seem to be an effective way to encourage WOM and referrals. However, they may be in conflict with the perceived objectivity of WOM; incentives provide the recommender with a stake in the receiver’s potential purchase decision and may therefore make the recommendation seem less impartial. Our study analyzes how RRPs’ affect recommendation behavior. We suggest that when recommenders are offered the opportunity of receiving an incentive for a referral, they are likely to engage in a process of metaperception, defined in social psychology as the process by which people judge what others may think of them or their behaviors. If the recommender believes that the potential receiver views the incentivized recommendation favorably, she will be more likely to make that recommendation. If not, recommendation behavior is less likely.

For practice, our findings suggests firms to avoid providing incentives to customer with high positive impression management needs and rather emphasize other benefits of providing WOM and making recommendations (e.g., “do something good for the cause”, “for your friend”, or “for the EMBA program” as shown in our introduction).  Moreover, we recommend targeting RRPs at strong rather than weak ties because of the lower negative effects of incentives on metaperception. For example, mobile phone companies could target college roommates, families with family plans. When targeting weak ties, managers should be aware that incentives need to be attractive enough to override their possible negative effect on metaperception.