There are geographies of psychology as sure as there are branches dealing with every demographic of humanity. Catriona Macleod received the 2017 Psychology and Social Change Award from her home institution, Rhodes University, late last year in large part for recognizing and then critiquing the psychology of Africa. This critique follows two paths: criticizing the state of psychology as it fails to shuck the experiences of its colonial origins for a true African experience, and in turn nurturing a more authentic African-based psychology.

This geographical interface is not, however, Macleod’s day job. She is currently the SARChI Chair of Critical Studies in Sexualities and Reproduction at Rhodes, and much of her academic work in psychology revolves around sexual and reproductive health and feminist theory. This is by no means divorced from the psychology of the continent, but by the same token it’s by no means automatically married to the region, either. So, while Macleod has written on teen pregnancy, abortion, sex education and feminist psychology – she is editor in chief of the journal Feminism & Psychology – she also addresses decolonialism and postcolonialism. The speech she delivered on winning the social change award, for example, was titled, “The spectacular failure and extraordinary success of psychology in South Africa: the decolonial imperative.”

As an article about her award on the Rhodes website explains:

Her vision is for the profession of psychology to serve its social purpose for all, moving towards a critical citizenship psychology that promote ethics of justice together with ethics of care. “Most importantly, action should be taken to radically strengthen the decolonial imperative.”

The Social Change Award, given to “psychologists who have extended themselves beyond the mainstream boundaries of the discipline of psychology and sought to contribute their knowledge to social change,” was first bestowed in 2008 when it went to Chabani Manganyi.

Macleod did not start her career in psychology, and even when she started studying psychology, her first instinct was to go into practice, not research. Her first job was as a high school mathematics teacher, which allowed her to save money to complete her post-graduate education. She has worked with a community-based non-profit and served on the psychology of several South African universities, becoming head of the department at Rhodes a decade ago until she was named SARChI chair in 2014.

Her 2011 book ‘Adolescence’, Pregnancy and Abortion: Constructing a Threat of Degeneration received both the Distinguished Publication Award by the Association for Women in Psychology and the Rhodes University Vice-Chancellor’s Book Award. In December, Rhodes University named her a “distinguished professor,” deploying the distinction for the first time since 2011.

Social Science Space asked Macleod about her award, her work and the impact of Africa on psychology and vice versa.

What does this particular award, the Social Change Award, mean to you?

Psychology has a chequered past in South Africa. On the one hand, it was used to bolster the apartheid regime’s racializing project, and was silent on the abuses meted out by the state. On the other hand, there was a small, but important, set of psychologists who wrote cogently about how psychology should be practiced in progressive and contextualized ways, and who provided support for people who suffered in opposing apartheid (e.g. detainees). There have been many changes post-apartheid, particularly in the demographic makeup of psychologists (mostly in terms of race).

In addition: psychology is a popular subject at universities; it is well established and organized as a profession; and psychological resources are used in a range of spaces. However, there are also multiple failures: it continues to be dominated by white women; practice is skewed towards assessment, diagnosis, and intervention with individuals; most psychologists work in private practice or for private institutions, with white and urban populations disproportionately benefitting from services; traditional topics of assessment, stress and psychopathology continue to dominate research, with social issues, such as housing, land reform, development programmes, water resources and socio-economic inequities largely ignored; knowledge is produced predominantly about adult, urban-based, middle-class participants. So this award is about highlighting the failures of psychology as a discipline and creating spaces where alternative, contextualized models may be further explored and emphasised.

For readers who might not be steeped in African academic traditions, how is academic psychology a colonial endeavor?

Psychology developed as a discipline in the Euro-American context. It was imported into African university and training spaces as part of colonising processes that sought to foreground particular knowledges and epistemologies and to denigrate others (in particular local, African forms of knowledge). Within this context, there have been several points of resistance over time, with writers decrying the manner in which psychology represented African peoples, its neglect of power relations and of epistemologies generated within the African context, and its concentration on the individual. Despite these valiant efforts, publishing and research resources remain skewed towards the global North. This means, firstly, that the opportunities for contextual knowledge production are limited, and, secondly, that textbooks which tend to define knowledge in a particular area are generally based on theory and knowledge produced in the global North.

What would you propose as a replacement or improvement, assuming you feel we still need psychology? In that vein, what do mean by a ‘critical citizenship psychology’?

Community psychology is probably the most established alternative form of psychological practice in South Africa. Much good work is being done under this rubric. The usual critiques, of course, apply (What do we mean by ‘community’? Is this simply a watered down form of psychological service for poor or marginalised people? etc.). However, generally South African community psychologists are aware of these pitfalls and are highly reflexive of self and the power relations within which they operate.

Other promising developments are african psychology, critical psychology, critical health psychology, and feminist and queer psychology. All of these variants of psychology, highlight particular forms of power relations and endeavour to forge epistemologies and methodologies that are in some way liberatory. I argued in my lecture for the Social Change Award for a movement towards a ‘critical citizenship psychology’ that could be seen as an overarching framework for the various liberatory forms of psychology. Such an approach promotes an ethics of justice together with an ethics of care; it attends to both the politics of the recognition and the politics of redistribution.

Your award, the Psychology and Social Change Award, specifically cites ‘social change’ in its name. Do you feel there is a requirement that psychologists be active in change, or is it a decision they can make on their own volition?

I think that one must be clear that there is no such thing as a neutral intervention. For example, in choosing to remain focussed on individual therapy and assessment at the expense of social issues, the psychologist is reinforcing a particular system (which generally privileges economically and socially resourced people). Having said that, I don’t think that any psychologist who is not comfortable with the messy work that ‘social change’ (of the liberatory kind) involves should be required to engage in such labour. However, they do need to be cognisant of the implications of the types of work that they do, and not to assume that this is the only or taken-for-granted manner in which Psychology should be practiced. 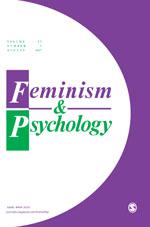 As the editor in chief of Feminism & Psychology, could you provide some insight on that nexus? Is it the exact same thing as “feminist psychology”?

How are these areas received by other parts of academic psychology and the public at large?

In general I think that it is safe to say that feminist psychologies tend to be on the margins of the discipline, particularly in certain geographic spaces (most notable the USA). In other spaces, such as South Africa, there is a slightly more established feminist voice in Psychology, but it is far from being mainstream. Answering the question about the public at large is a difficult one (which public?). I have no particular evidence for how the “public” may respond, so would rather not hazard a guess.

Do you have any career advice for a young woman (or young man) considering psychology?

I tend to steer clear of providing advice, because it sets me up as some kind of expert on somebody else’s life. All I can say is that I am passionate about my work, and I enjoy going to the office each day. I wish the same for you.

Excellent – thanks for a very thought provoking interview

1 week ago
1157
Insights
Watch the Video Interview: Qualitative Research in an Asian Context