For many people, Brazil is still considered a ‘racial democracy,’ which implies the idea of a land of harmonious racial relations and exempt from racism, prejudice and racial inequalities. Proponents of this idea claim that the core of Brazil’s enduring social problems is solely due to social class inequalities. However, there is evidence revealing a different picture. Rather than a ‘racial democracy,’ racism and prejudice against black people in general, and women in particular, remains strong in the minds of many Brazilians. Within this context, social media platforms play an important role in the dissemination and reinforcement of such ideologies. 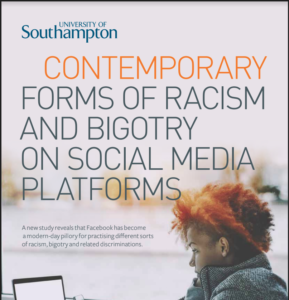 This article is based on a policy brief prepared by Dr. Luiz Valerio entitled, “Contemporary Forms of Racism and Bigotry on Social Media Platforms.”

Evidence of this argument is that upwardly mobile black women have been the preferred target of racist discourses on Facebook in Brazil, and most of them conveyed through derogatory humor. According to a recently released Policy Brief I authored, 81 percent of the victims of racist discourses on Facebook in Brazil are well-educated, middle-class black women 20 to 35 years old. Moreover, the people who construct and disseminate such discourses are young males (65.6 percent of the cases analyzed) in their early 20s.

It is not difficult in Brazil to find social media racist posts such as: 1) ‘Your place is in the fields harvesting cotton rather than traveling across Europe’, 2) ‘Wait for the snow to melt down and use the water to do the dishes, ape’, 3) ‘Where did you buy this slave? Can you sell her to me?’, 4) ‘She only got this job due to affirmative actions, otherwise …’, and 5) ‘How dreadful. This [black] Miss looks like an ordinary housekeeper. She does not belong there.’ These examples barely scratch the surface of what circulates on both Facebook and Twitter in Brazil.

Given this picture, what is the underlying message embedded in this sort of discourse or what are their ideological motivations? First, it is possible to identify the existence of a strong belief that online anonymity represents a sort of ‘shield’ that prevents individuals from being found and held accountable for their actions.

Clinging to this belief, many users unleash their discriminatory ideologies unrestrictedly and without any sort of crise de conscience (even though they would certainly refrain from expressing this sort of comment on face-to-face social interactions).

Nevertheless, the moment their offences reach the headlines of news articles, they take one of the following actions: 1) delete the derogatory post, 2) shift their profile from public to private, 3) delete their account, or 4) claim that the post was just an ‘innocent’ joke.

Consequently, these actions suggest that, in fact, they are aware that their attitude is inappropriate, and the ‘shield’ provided by online anonymity is not as strong as initially imagined. Moreover, this digital technology also enables these people to disregard any social distance that might exist between themselves and the target of their offences since in two-thirds of the cases analyzed, it became clear that they had no previous relationship with the victims (online or off-line).

The worrisome consequence of this evidence is that, potentially, these people can target practically anyone who comes to their mind in the online environment. Furthermore, the dissemination of these ideologies is a powerful magnet attracting numerous like-minded people, and amplifying the reach and reverberation of their hateful discourses in ways and duration not commonly seen in the context of everyday social relations. The dissemination and reinforcement of these discourses on social media echo endlessly in cyberspace, resonating the racism for a long period.

There is evidence suggesting that deep-seated racism, influenced by beliefs in whitening ideology (i.e. the belief that whiteness stands for the ultimate symbol of modernity, progress, and the only legitimate beauty pattern; whereas blackness embodies exactly the opposite), represents one of the main supporting pillars of this practice. Given that humor is a socially accepted form of communication, it also provides a convenient escape route to convey racist ideologies without sounding blatantly racist. After all, they are simply ‘innocent’ jokes recited for ‘entertainment’ purpose only.

Nevertheless, by disseminating discriminatory and racist discourses on social media, these people are, in fact, undermining the improved social space of upwardly mobile black women and ‘punishing’ them for ‘trespassing’ the invisible color line that separates strong social and racial hierarchies. In other words, these people are conveying the idea that black women are not legitimate occupants of social spaces associated with privilege. Within that, social media platforms become a sort of modern-day pillory where ‘trespassers’ can be ‘exemplary punished’ and placed back into their ‘original’ position of inferiority and subservience.

In sum, as an increasing number of black Brazilian women attain higher social roles and reach higher educational levels, this progress upsets racist minds because, for them, black women should perform solely subservient and unskilled social roles (such as harvesting cotton as conveyed in one of the posts). Thus, the result of this pernicious practice consists in the reinforcement and perpetuation of negative and reductionist social representations of black Brazilian women both online and offline, since these two environments are not detached from each other.

Two major initiatives could be implemented to tackle this phenomenon. First, educational programs at primary and secondary schools should be implemented to foster the understanding amongst pupils that online attitudes also have impacts on people’s lives in the offline context. This sort of initiative may contribute to increasing the likelihood of a new generation of young adults with a different mindset.

Second, government authorities should implement awareness campaigns targeted towards the general public to clarify that, contrary to what many people believe, the online environment is not a sort of ‘nobody’s land’ where everything is possible and there are no consequences. In other words, people should be aware that the rule of law also applies to attitudes held in the online realm, and the proponents of racist ideologies, in fact, can be held accountable for their attitude.