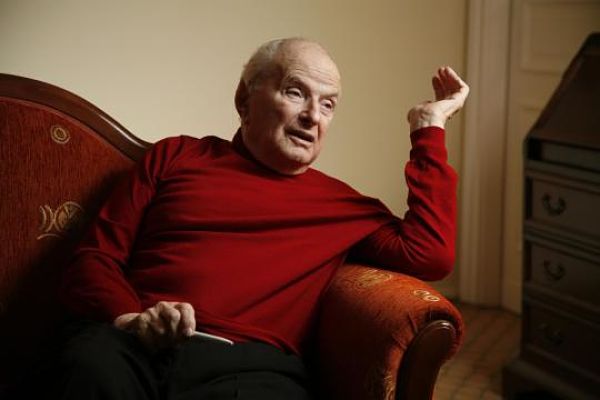 On his personal website, historian Walter Laqueur posted a quote from one of his memoirs. “When the Abbé Sieyès was asked what he had done during the Terror, he gave the famous answer, ‘J’ai vécu.’  Since I also lived through a stormy age, this is the only answer I can give; many of my contemporaries did not survive, and in this respect, as in some others, I have been lucky.”

Laqueur, who fled the Holocaust, experienced the birth of Israel, founded the Journal of Contemporary History, and was an unflinching observer of terrorism and an authoritarian Russia, died on September 30. He was 97. In those years he wrote – as a journalist, an academic, an autobiographer and even as a novelist – more than five dozen books and hundreds of articles and papers. “Laqueur barely escaped with his life and scarcely attended university,” current editor Stanley Payne observed in Contemporary History. “[He was] very much the self-made man and scholar.”

Walter Ze’ev Laqueur was born May 26, 1921, in Breslau, a town then in Weimar Germany’s Lower Silesia, and now in Poland. He lived a middle class existence there with his father Fritz, who made clothing, and mother Elsa until the Hitler era. In 1938 Walter, eight months out of gymnasium (high school), left — by himself on a student visa — for the British mandate of Palestine. He departed a day before Kristallnacht; he never again saw his parents, who died in the Holocaust.

In Palestine, Laqueur attended the Hebrew University of Jerusalem for a year, then joined the kibbutz movement where he worked as a laborer on various collectives until 1944. He left to become a fulltime journalist based in Jerusalem and reported on Palestine and the Middle East until 1953, when he relocated to London.

In the United Kingdom, Laqueur became the founding editor of Survey: A Journal of East & West Studies, serving from 1955 to 1964. His time at Survey established his reputation as a gimlet-eyed observer of totalitarianism, as The New Criterion suggested when Survey closed in 1990:

Learned in several fields and commanding many languages, and knowing something from personal experience about the realities of totalitarianism in our time, [Laqueur and Survey’s next editor, Leopold Labedz] brilliantly succeeded in marshaling a good many other specialist writers in the campaign to establish the truth about a subject that was so often fictionalized in the press, in the academy, and in the foreign offices of a good many Western nations.

Following his time at Survey, Laqueur founded and edited, with George Mosse, the Journal of Contemporary History, turning the startup into an influential quarterly academic journal focused on post-1930s history. Its first issue was themed, ‘International Fascism 1920–1945,’ and while Laqueur would become a respected scholar on fascism in his own right, that lay a decade and a half down the road. Contemporary History’s editorial offices were housed at the Institute of Contemporary History and Wiener Library for the Study of the Holocaust and Genocide until 2005; Laqueur was director of the institute from 1965 to 1994. (The journal moved to SAGE, the parent of Social Science Space, in 1972.)

Laqueur was also chairman of the International Research Council of the Center for Strategic and International Studies, where he founded Washington Papers and Washington Quarterly. His scholarship and journalism centered on many of the great ‘isms’ of the later 20th century: fascism, communism, Zionism or terrorism. And despite the currency of his concerns, he inevitably approached them first by looking at their historic and cultural origins. The Washington Post spotlighted two of his works to make this point:

Among his most noted works were the classic volumes “A History of Zionism” (1972) and “A History of Terrorism” (1977), which [Georgetown Professor George] Hoffman described as the first major effort to move beyond journalistic, anecdotal or polemical discussions of terrorism to understand its deepest roots. Peter Bergen, a journalist and authority on Osama bin Laden, has called Mr. Laqueur the “dean of terrorism studies.”

In fact, Laqueur was a man whose learning always seemed in vogue. During the Cold War his frequent trips to the then-Soviet Union (Russian was among his many languages) and Eastern Europe made him an esteemed Sovietologist. Then his studies of fascism – especially its post-World War II varieties – gave him a voice in the rise of non-communist authoritarianism. One of his last books, released in 2015, was Putinism: Russia and its future with the West.

Long before 9/11, Laqueur was writing about terrorism, and his definitional observations remain a baseline from which other scholars take off or rebel. The New York Times noted his prescience in its obituary of Laqueur:

In a new introduction to his 1977 book A History of Terrorism, Mr. Laqueur warned that the world was at the dawn of a new era in which “technological progress would put unprecedented destructive power into the hands of a small group” of fanatics bent on inflicting terror in a holy war. That warning was dated June 2001, less than three months before the Sept. 11 terrorist attacks.

Laqueur’s latest and presumably last book, written with Christopher Wall and published last year, looks at terrorism and trades history for forecasting: The Future of Terrorism: ISIS, Al Qaeda, and the Alt-Right.

Given his impressive lifetime word count, Laqueur never strayed from the journalist’s impulse to keep the reader engaged. As he wrote on the 25th anniversary of Contemporary History:

[I]t is still true that professional history should not necessarily be difficult to read, that it does not have to be encumbered by endless methodological discussions, excessive use of jargon and a scientific (or pseudo-scientific) apparatus of footnotes. If academic contemporary history ever suffers a decline, it will not be because it lost its raison d’etre, but for a more prosaic reason – because it lost its tie with its public, a public growing all the time.