It is a truism in psychology that old ideas die hard and even educated minds are hard to change, but it is still distressing to see the phenomenon displayed in medicine, where open-mindedness is formally celebrated as a virtue. Recent events in the United Kingdom, however, establish once again that settled opinions can be difficult, if not impossible, to dislodge, even when the consequences to patients are severe.

In 2015, the United States Institute of Medicine (now the National Academy of Medicine) recognized chronic fatigue syndrome as “a serious, chronic, complex, and multisystem disease,” rather than a psychological condition. Since then, U.S. agencies, including the National Institute of Health and the Centers for Disease Control, dropped their previous treatment recommendations for psychological and behavioral interventions such as cognitive behavior therapy and graded exercise therapy, which many patients had found harmful. Progress has come much more slowly in the United Kingdom, where a group of psychiatrists and other physicians have stuck tenaciously to CBT and GET, on the theory that the symptoms of chronic fatigue syndrome (sometimes called myalgic encephalomyelitis or ME/CFS) are due to dysfunctional “illness beliefs” and consequent “deconditioning.”

The situation in the UK appeared to be on the brink of change last fall, when the influential National Institute for Health and Care Excellence, or NICE, issued a draft revision of its 2007 guidelines, which had endorsed CBT and GET. The final version of the new NICE clinical guideline was scheduled for release on August 18, but it was abruptly “paused” on the eve of publication following heated objections from powerful and entrenched professional interests.

NICE’s delay caused great dismay among patients and patient advocacy groups. It was greeted approvingly, however, by prominent members of the medical establishment who hold fast to the psychological view of ME/CFS, although with more enthusiasm than coherence.

As reported in The Guardian, Dr. Alastair Miller, a retired infectious disease specialist, explained the need to maintain the old recommendations: “Importantly, without CBT and GET, there is nothing,” he said. “No new therapies or approaches have emerged since 2007, so in practice one needs to question whether there was ever a requirement to have a new guideline.”

Unfortunately, Miller does not appear to realize that something is not always better than nothing. “First, do no harm” is not actually in the Hippocratic Oath, but it is still an important precept in medical practice. Therapies that have proven harmful, as has been the consequence of GET for many patients, should not be continued, whether or not there is something to offer instead.

Even CBT, which is more useless than dangerous, is hardly without cost. Perhaps it has not occurred to Miller, but there is a reason for the lack of “new therapies” since 2007. The CBT advocates – sometimes called the biopsychosocial school – had so thoroughly dominated approaches to ME/CFS that virtually no biomedical research regarding the condition was pursued for many years. Fortunately, that situation has improved, especially in the U.S., where research is moving forward at major universities and medical centers, which would of course be further encouraged by publication of the NICE revisions.

Not to be outdone on the fallacy scale, Dr. Andrew Goddard, president of the Royal College of Physicians, told the BBC,

There is reasonable evidence, for example, that graded exercise therapy helps a group of patients with ME/CFS and, while not without risk, our experts strongly support its ongoing use as an option in this condition.

As Goddard should well know, individual clinical observations – that is, anecdotes – must at some point give way to actual data. Randomized controlled trials and meta-studies are conducted for a very good reason. As professor Brian Hughes (my friend and coauthor) has explained, “Every clinician has great confidence in their own judgement. And therein lies the problem. Objective assessment is always required to combat the conceit of personal wisdom” (italics original).

But Goddard’s statement is even more wrong than that. Once he recognizes that GET is “not without risk,” the requirement of informed consent comes into play. Patients must be informed of the likely harms and potential advantages of the proposed therapy, which are not mentioned in NICE’s 2007 guideline. That alone would be reason enough to require its rescission, notwithstanding Miller’s lament that no new therapies have “emerged.” Moreover, the justification that GET “helps a group of patients” is hollow, in light of the acknowledged risks, given that there is no way to identify such a subgroup before administering the therapy.

The defenders of CBT and GET – the critics of the revised NICE guidelines – ultimately make the same tired excuses that are always raised by last-ditch practitioners whose careers and reputations have been built on unsafe, antiquated therapies. One could easily imagine George Washington’s doctors, in 1799, arguing that without bloodletting “there is nothing.” Or perhaps President James Garfield’s doctors, in 1881, extolling the “reasonable evidence” in favor of probing a gunshot wound with their unwashed fingers. Or maybe a psychiatrist in the 1950s explaining that no new therapy better than lobotomy has “emerged.”

The proposed NICE revision is accompanied by a 356-page evaluation of all clinical studies purporting to support CBT or GET as treatment for ME/CFS. The great majority of them were deemed “very low quality,” though a few achieved the somewhat better level of merely “low quality.” Unsurprisingly, the arguments for continuing to recommend such discredited practices turn out to be as poor as the therapies themselves.

4 days ago
598
Insights
Watch the Video Interview: Qualitative Research in an Asian Context

5 days ago
639
Event
Watch the Webinar: Critical Thinking Skills in the Age of Misinformation

I disagree with this only in that ‘CBT is useless rather than harmful’. The problem is that the CBT model used is not simply to help patients with their thoughts around their symptoms. It is explicitly to inform them and educate them to ignore their symptoms and to counsel them to push through them. The difference between: Explicitly telling a patient they should do more (or the same amount) and build up a tolerance level (GET). Implicitly telling them that by counselling them and reeducating them that their symptoms are not reflective of a serious disease, and there is no… Read more »

The original cluster of “Mystery Illness” that baffled Dr Gary Holmes into authoring his 1988 “Chronic Fatigue Syndrome” definition was later found to be caused by toxic black mold “Stachybotrys Chartarum” This neurotoxic immune suppressing mold fits the circumstances for why a whole group of teachers got sick in the same room. We told them at the time that they should look into the air filters in that room, but they refused. CFS doctors and researchers never came back to find out what happened. I suggest that a study be done of doctors and researchers to find how 100% of… Read more » 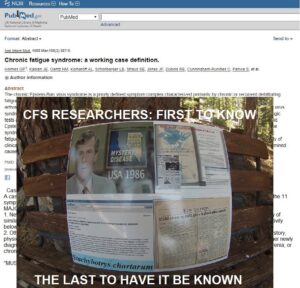 I realize that the idea of “black mold exposure” sounds implausible and unrealistic.
Completely unrelated to ME/CFS.
Yet if you have seen Jen Brea’s documentary ‘Unrest”, then you have seen that
as crazy as it sounds, there is some evidence for this phenomenon. 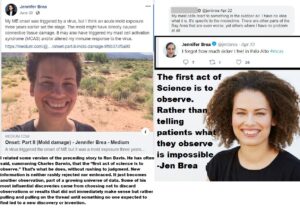 I believe this is the 2nd pause of the guidelines. ANd that it is against NICE’s internal guidelines to pause something twice.

Thank you for this well written piece. Severe sufferers of this illness do not benefit from airy fairy “treatments” such as GET or CBT. They are too unwell to even access these “treatments”. They need medical intervention and now. Psychologists are delusional and arrogant if they think they will help! We are nothing short of neglected and I believe that they are all afraid of “failure to treat” being levelled if these nonsense “treatments” are discontinued. (PhD Student in Psychology (studies interrupted by severe relapse 2 yrs ago, sufferers of 30plus years)).

Does Goddard et al wish to continue harming some of the ME/CFS patients for financial gain or pure enjoyment?

I’m glad the quackery which ME patients in the UK have been exposed to for half a century is now reaping the censure it deserves. As far as this long term patient is concerned the lack of publication of the new Guideline on 18th August 2021 draws a line after which all harm and deaths from this disease must be laid at the door of NICE and the BPS dogma. People are dying. Hope is lost. We’re looking at another 50 years of gaslighting and zero treatment options that are properly meaningful. I’m glad to see some good science happening… Read more »

NICE continue to compound the error that they made back in 2007, which saw Graded Exercise Therapy and Cognitive Behavioural Therapy become the officially recognised treatments in the UK, in the first incarnation of the Clinical Guideline for what they termed “Chronic Fatigue Syndrome”. It was that error of judgement, by a guideline development group dominated by psychiatrists / psychologists, which recklessly overstated the evidence in favour of GET & CBT and likewise turned a blind eye to the potential for harm. This paved the way for funding the employment of a small army of therapists, who’s livelihoods now depend… Read more »

4 days ago
598
Insights
Watch the Video Interview: Qualitative Research in an Asian Context

5 days ago
639
Event
Watch the Webinar: Critical Thinking Skills in the Age of Misinformation