As organizations’ ethical failures continue to pile up in the news headlines, there is no better moment to get a firm grasp on how ethical systems work and how they can be more successfully managed. Group & Organization Management has published an up-close, qualitative study of cadets at West Point—the nation’s oldest military service academy, with its two-centuries-old Honor Code—to discover the complex competing forces, or tensions, at work in these systems, concluding that both scholars and practitioners may find this information useful in developing a code of 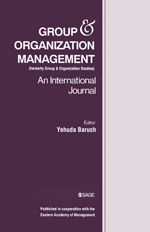 ethics that works. Take a look at just one example from the study:

[W]e interviewed a newly minted Army major who just arrived to teach Mathematics at the Academy. During an emotional portion of the interview, he admitted to witnessing cadets cheat back when he was a cadet. Rather than bring it to the attention of the Honor board, he chose to remain silent. He said,

It wasn’t so much about them, it was more about me [with emphasis]. I wanted to be liked. Wanted to be popular. I guess what I wanted, in a tough environment like this [West Point] is that I just wanted to be accepted. If I told on them, I’d lose all of that.

As evidenced by this sentiment, reconciliation of these competing forces is not always successful. At other times, we found this cognitive and emotional struggle realized.

Are you interested in receiving email alerts about the latest management and organization theory research? Then click here!

As the snippet with the army major above shows having the ‘group mentality’ is a really important element of all this…I think that, unfortunately, most people have a fairly large moral black spot when it comes to accepting unethical behaviour by members of the group they identify themselves with…you can really see this in international finance.