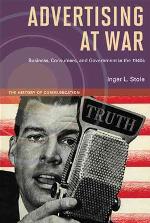 Since the end of World War II, the US government has banned some product advertising (e.g., cigarettes) and has regulated a number of dubious practices (e.g., false or deceptive claims, nondisclosure of information). Yet, advertising as an institution has largely been accepted as a necessary component of the free enterprise system. To be sure, critics ranging from

John Kenneth Galbraith to Vance Packard to Naomi Klein have lambasted advertising for its shortcomings, but their impact on policy has been minimal. During the late 1930s, in contrast, many journalists, economists, members of Congress, officials in the Roosevelt Administration, and much of the public at large seriously questioned the contribution of advertising to the economy. An mortal, political threat loomed over the industry. In her new book, Advertising at War: Business, Consumers, and Government in the 1940s, Inger L. Stole explains how this hostile environment was transformed into a far more receptive one in just a few short years.

Click here to continue reading; follow this link to see the new issue of Journal of Macromarketing and this one to see more new articles and book reviews in OnlineFirst.

Census
How Prisoners, Soldiers and Missionaries Complicate the Census

Census
How Prisoners, Soldiers and Missionaries Complicate the Census