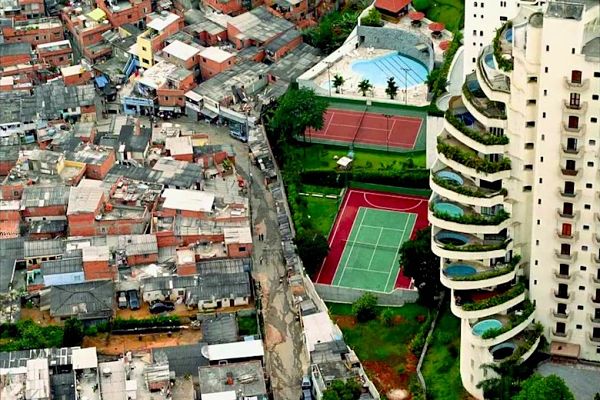 Karl Marx recognized that the polarization at the heart of inequality has its own self-enhancing momentum. There are no natural processes that reduce the division between the haves and the have-nots. The opposite is the case, as has been seen over the past century. Without political interventions, sometime cataclysmic ones, the separation between rich and poor becomes greater.

Many studies have shown that this widening gap between the rich and the poor has been one of the most significant socio-economic developments across the world in recent times. As wealth is concentrated in an ever-smaller percentage of the world’s population, those with the least increasingly suffer. This imbalance is a significant contribution to the considerable disquiet reflected in the political upheavals in many countries over the last few years.

In the current issue of Contemporary Social Science, the various contributors demonstrate that there are a broad range of social inequalities, beyond the economic ones, that preserve and aggravate the divisions in society.

As the chapters in this volume – carefully brought together from many countries by Jennifer Jarman from Lakehead University, Ontario and Paul Lambert from Stirling University in Scotland – make clear, the consequences of self-perpetuating inequality are very far reaching.

In order to study the implications of inequality it is crucial to clarify the assessment of social stratification. Cinzia Meraviglia and her colleagues from the University of Milan report on a major exploration of the various aspects of this: occupational prestige, socio-economic status and social distance. They come to the interesting conclusion that underlying all of these is the nature of a person’s occupation. This gives them the basis for a new international measure for social stratification, published for the first time.

Yet, perhaps not surprisingly, Roger Penn, from Queen’s University, Belfast, argues that the traditional UK concern with class is often ignored when the quantitative exploration of occupation takes centre stage. Between them, Meraviglia and Penn demonstrate that the variations in inequalities are multi-faceted. Their examination requires both qualitative and quantitative considerations.

The self-sustaining nature of social inequality is most starkly revealed in the role of education, as a number of contributors to this volume demonstrate. Tim Morris from the University of Bristol and his colleagues reveal the disturbing effects of disadvantage on educational outcome, with its consequent influences. In a very thorough comparison of children with the same cognitive abilities in different schools they show that, in broad summary, children in fee paying schools have a 25 percent advantage over those of similar cognitive ability in state schools. These differences are reflected throughout the educational system.

The consequence of class inequality on educational attainment is further developed by Gabriele Ballarino and Nazereno Panichella from the University of Milan. They show that although the number of people in tertiary education has increased in Italy over the past quarter of a century, the proportion of people from lower socio-economic backgrounds going on to university is still much lower than those from higher socio-economic backgrounds. However, they point out that the decrease in the length of university courses from four to three years did give an impetus to people from poorer backgrounds to undertake advance courses of academic study. This has been further enhanced by the reduction in the distinction between technical/vocational tracks in school and those that are more attuned to future university study.

There are many parallels to the Italian experience revealed in Scotland in the contribution from Christopher Playford from Edinburgh University and his colleagues. Once again, it is shown that children from disadvantaged backgrounds do not benefit from education as well as others. Parental occupation has a particularly strong relationship to educational outcomes.

The long-term effect of missing out on education in the late teen years is shown by Kevin Ralston from the University of Edinburgh and his colleagues in their 20 year follow up of NEET people, those who were not in education, employment or training in the months and years after they left school. They had more precarious participation in employment and lower average incomes, thereby perpetuating the cycle of disadvantage. NEET women do seem to come off rather better than men, but the exact reasons for this are far from clear.

A further process that maintains disadvantage from one generation to the next is the way in which class relates to overall feelings of well-being. In a subtle exploration of the relationship between enriched social connections, well-being and class, Yaojun Li from Manchester University, demonstrates that whilst social capital can ameliorate some of the effects of class, that still has a big influence. Sadly, this is reflected in recent news items, most notably the fire in the Grenfell Tower block in London. There is much evidence that the local community was very supportive, but these low-income, mainly immigrants, could not get their voices heard to deal with the risks they lived with.

Beyond the years of employment, social inequalities continue to have a profound impact on people’s lives. Robert Blackburn from the University of Cambridge and his colleagues demonstrate that the inequalities in their working lives continue into retirement, with women suffering greater disadvantages than men. This is despite the fact that, across the world, women tend to be, on average, in higher status jobs than men, who are more likely to be in dirty and dangerous work.

One solution to the recurring degradations of inequality is offered by Jonathan Leightner from Augusta University in the US and Zhang Haiqi from the Shanghai Tax Bureau. This unlikely duo offers what many would consider a radically progressive proposal — but they argue it from a capitalist economics perspective. Their analyses demonstrate that moving the tax burden from the socially disadvantaged to the social advantaged would cause gross domestic product to rise.  They take their challenging analysis a stage further to show that often it is property and corporate taxes that have the greatest impact on GDP. These fiscal processes, then, could reduce social inequality by reducing income inequality.

This large scale economic analysis is taken a step further by Jenny Chesters at the University of Canberra. She explores the relationship between the speed of economic growth and the scale of wealth inequality in a country. Reviewing data from the G-20 countries she shows that the more rapidly an economy develops the larger the disparity in incomes. Wealth inequality is more likely to be stable or decline when there is negative or low economic growth. Apparently, in an expanding economic universe the rich move away from the poor more rapidly than in a steady state one.

Taken together these 11 contributions provide a coherent, salutary picture, one that has unfortunately been apparent for many centuries, but which is becoming increasingly of political significance. For although social and economic inequality was the foundation of revolutions in the past, there was a time, perhaps half a century ago, when the promise of social mobility, especially through hard work and education, the development of welfare systems and reduction in control by the ‘upper classes,’ all generated an optimism that such inequalities could be healthily reduced.

However, the studies in this volume demonstrate that the debilitating cycle that maintains and exacerbates inequalities is now as strong as ever. It is embedded in access to and uptake of educational advantages. From that flows subsequent disadvantage that is then maintained into old age. Fiscal systems could moderate these powerful, self-serving processes, but unfortunately the people in the positions of power are precisely those who benefit from the inequalities.

The studies here, nonetheless, show that there are benefits to society as a whole from reducing social inequalities. This volume therefore is unlikely to spark a revolution, but it is an important contribution to a vital debate.