Earlier this month I logged on and listened to a fascinating webinar on measuring policy impact. It was organized by the Population Reference Bureau and the Kenya-based African Institute for Development Policy, with contributions from the Center for Strategic and International Studies and Brookings. What struck me as a member of the audience was how much of the discussion focused on communications and engagement. The semi-professional disciplines of both policy influence and research impact always attract the communications crowd. The dominant narrative goes like this: if only we could get experts to communicate more clearly to non-academic audiences then good stuff would happen. There’s no doubt good communications and framing research and evidence for your audience is essential. Many academic institutions could learn a lot from policy-savvy think tanks operating on Capitol Hill, like PRB. However, my question to the panel was: should we be aiming higher than meeting the demands of policy actors? Surely what we actually want to do is influence change, not reinforce social and political norms? This is what lies at the crux of many academics’ concerns around policy engagement.

What Happens to Research When we Try and Make it Useful?

There is a serious debate around what we really mean by evidence-informed policy and how we measure it. An emphasis on usefulness seems to suggest that measuring success comes down to how often your think tank or research organisation gets its report used, the level of positive engagement from the target audience online and in person, and the number of times journalists come to your experts for information. Perhaps some mentoring and evaluation wonk out there can construct a “usefulness results framework”. Academics’ anxiety over engaging in policy, which can sometimes seem very inconvenient, centres less on the issue of measurement and more on the fundamental relationship between evidence and policy.

Take, for example, this fascinating study by two academics from the University of Edinburgh. They identify from the literature several different models for the relationship between research and policy. The first is the simple one favoured by research donors and think tanks that says that research, if packaged correctly, can directly “enlighten” policy actors. However, another model describes how by trying to shape research and evidence for policy we may actually allow politics to shape knowledge. A sort of research-uptake-in-reverse, where all those snazzy infographics and interactive policy reports produced by influential think tanks tell us more about particular interest groups’ politics than what an evidence-based approach to a particular area of policy might look like. The same argument goes for donor-led research on the efficacy of development programmes. If the research user helps shape the study, does this undermine the resulting narrative? As one senior World Banker put it recently: “we don’t always know which questions to ask”.

The latter model reminds me of the dynamics of engaging with the media. I spent the first part of my career working as a press officer in an NGO delivering evidence-based advocacy. I would spend a lot of time trying to be useful to journalists, finding facts and expert opinion I hoped would answer their questions and shape their articles. But success in placing your evidence in the media or having your expert interviewed largely rests on an alignment with editorial interest and journalists’ own views. This is why development charities spend so much time talking to The Guardian’s Global Development team and not the Daily Mail. 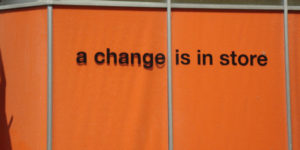 change is in store by Gloria Bell. This work is licensed under a CC BY 2.0 license.

Working on Both Sides of the Equation

So back to my original question – how do we move beyond being useful and actually influence change? The panel reminded me that we need to be realistic. As any good advocacy practitioner knows, the tactics of the activist are often complemented by insider lobbying. Or as John Gaventa put it in his influential Power Cube model – you need to work on both sides of the equation. This brings me to the Institute of Development Studies’ own approach, “engaged excellence”. We try and overcome academics’ nervousness about policy engagement by demonstrating that research rigour and policy engagement can be mutually reinforcing. In development studies, at least, the involvement of critical stakeholders, such as government officials, practitioners, communities, and advocates in designing and communicating research can be very powerful indeed. This is the third model for research to policy processes set out by Boswell and Smith, referred to as co-production. I recently came across a nice example of this from an ESRC/DFID action research project in Sierra Leone seeking to reduce teenage pregnancy. The impact study I co-authored with the lead researcher found it was carefully managed partnerships with the UNICEF country office, the relevant district committees, and the government ministry of social welfare that provided the potentially controversial research with policy traction.

We should be more ambitious than just making ourselves (and the experts we work with) useful to the various groups we hope might use the research and policy analysis our institutions produce. I once worked for a charity that campaigned against unregulated international adoption and we found ourselves giving interview after interview on Madonna’s controversial adoption of children from Malawi. Our expert opinion and evidence on keeping children in family-based care in their own communities was flavour of the month. However, we largely fed ammunition to an international media and African policy community that had already made up its mind. It was a great communications success and did the charity a lot of good but we did not really influence any change.

Sometimes you have to also be the awkward squad – research and researchers need to challenge dominant paradigms and expose inconvenient truths. I am reminded of Andy Sumner’s work on the New Bottom Billion back in 2010 when IDS challenged the dominant view that development must be about tackling extreme poverty in the poorest countries. Andy’s data suggested that three quarters of the world’s poorest people actually lived in middle-income countries. His ideas initially fell on stony ground. Despite some brief media interest, donors and multilaterals just didn’t want to hear this. However, NGOs like Save the Children began to pay attention to this evidence and various development agencies began to incorporate other emerging analysis of income inequality and multidimensional poverty into their thinking. This all fed into an increasing focus by the development community on rising inequalities within countries. This movement, which was also supported by qualitative research on people’s lived experiences of poverty provided by Participate, helped shape the Leave No One Behind commitment in the Sustainable Development Goals. Such evidence-based shifts are long and incremental and almost always impossible to attribute to specific pieces of research or particular organisations. Nonetheless, I feel proud of the contribution I believe we made.

Bodies of Knowledge and Relationships

Relationships, networks, and bodies of knowledge play a far more significant role in change processes than short-term communications campaigns on specific reports. As I explored in the Social Realities of Knowledge for Development, the interaction between research and policy is deeply social and the most appropriate means of measuring your institution’s impact probably relates to changes in relationships, not column inches, tweets, or policy citations. So, by all means, let’s keep making time for producing briefings for MPs relevant to their top concerns, sending out quick responses to big media stories, and inviting ministers to speak at our events when they coincide with what’s in their in-tray. However, in parallel we can also manage the risk of being co-opted and build longer-term partnerships that produce policy-orientated, transformative knowledge.

International Debate
MLK and His Impact on Social Science Scholarship

Infrastructure
Zeynep Pamuk and the Case for Creating Science Courts

Insights
Joel Mokyr on Economic Lessons from the Past

Communication
Hear, Hear! Audio Has a Role as a Serious Pedagogic Resource

International Debate
MLK and His Impact on Social Science Scholarship

Infrastructure
Zeynep Pamuk and the Case for Creating Science Courts

Insights
Joel Mokyr on Economic Lessons from the Past

Communication
Hear, Hear! Audio Has a Role as a Serious Pedagogic Resource

Insights
Learned Commentary on the Legacy of January 6 Attack