Editor’s note: We are pleased to welcome Dr. Renáta Kosová and Dr. Cathy A. Enz, both of Cornell University, who published “The Terrorist Attacks of 9/11 and the Financial Crisis of 2008: The Impact of External Shocks on U.S. Hotel Performance” on September 20, 2012 in Cornell Hospitality Quarterly.

The U.S. hotel industry faced two major external shocks in the decade of the ’00s—the terrorist attacks of September 11, 2001, and the financial crisis of late 2008 thought to have culminated on September 15th, the day after Lehman Brothers declared bankruptcy. While speculation and opinion has

flourished on the impact of such shocks to the lodging industry, little attempt has been made to devise empirical models to isolate and explore the effects of these events on hotel performance. The conventional belief is that such shocks have a damaging and long-term impact on industry revenues. However, it is also possible that the impact of such shocks is overstated and hotels adjust relatively quickly, though such adjustment may vary across locations and segments. The impact of the collapse of the financial markets and the devastating events of September 11th on the lodging industry is the purpose of our study forthcoming in Cornell Hospitality Quarterly. 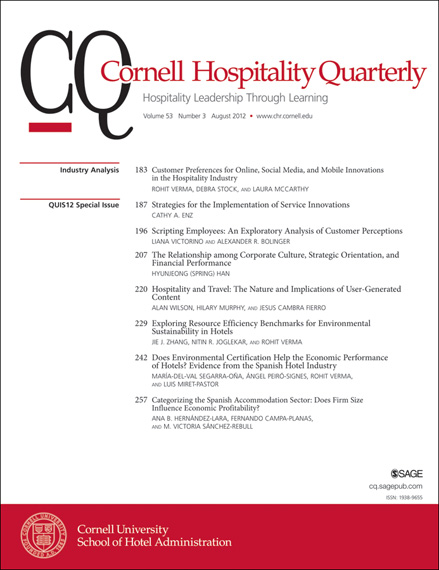 Using data from Smith Travel Research covering nearly 35,000 hotels, this study deploys a longitudinal modeling approach to assess the impact of the two shocks on hotel-performance metrics – average prices, RevPAR and occupancy. Our empirical approach not only controls for various hotel and market characteristics, such as hotel size and age, monthly seasonality, unemployment, population, and other market-specifics, but also unobserved hotel heterogeneity across hotels. Empirical models that include such controls are necessary to assure that the study captures the isolated impact of the external shocks and the duration of their impact.

The results from this study show that hotels were significantly affected by both events, but they started to recover relatively quickly, within four months of each shock. Because of the nature of the shock, the 9/11 terrorist attacks had an abrupt and dramatic impact in reducing hotels’ occupancy; average prices briefly followed occupancy downward. The effects of the financial crisis took longer to develop, but were less striking, and apparently well-handled by most hotel managers. Analyses across different segments revealed that hotels in the more complex luxury segment are the most susceptible to environmental shocks, but that the economy segment is the slowest in recovering from terrorism. Moreover, a sub-analysis focused on New York City’s hotels, which stand next to ground zero for both shocks, showed a pattern of occupancy, rates and RevPAR similar to the rest of the U.S. Overall, our study paints a picture of an industry that regained performance quickly and demonstrated its ability to successfully adapt and quickly recover from these extraordinary environmental shocks.

Click here to read the article in Cornell Hospitality Quarterly, and follow this link to receive email notifications about the latest research on hospitality management from CQ.

2 weeks ago
911
Communication
Watch the Video: What’s Next for #AcademicTwitter?

Hello, Very good article, the truth is that every day is what ocurrre. As a hotel owner, I always left wondering whether we adapt to the times to come or not …. I recommend you form yourselves on the issue of revenue management. I after much hesitation, I took a course at the end Revenue Management, which is both professional hotel and tourism sector but focused on positions, as people who want to gain knowledge of the latest trends in Hotel Management. I made it through http://www.cesae.es/index.php/24-revenue-management/49-revenue-management/, and I can say I am delighted. Good agenda, very práctco I could… Read more »

2 weeks ago
911
Communication
Watch the Video: What’s Next for #AcademicTwitter?

2 weeks ago
874
International Debate
The Covid Pandemic in France: A Review