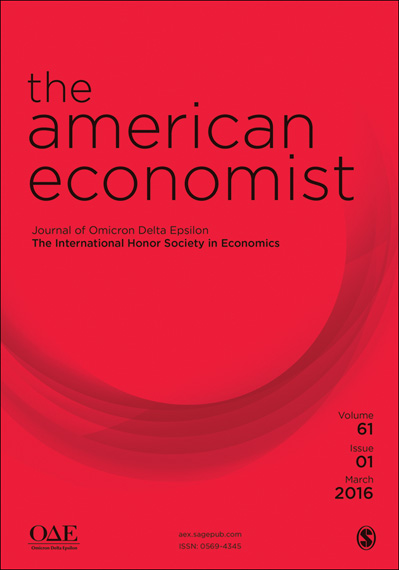 This edition of The American Economist marks a new chapter in the history of the journal and its sponsoring organization, Omicron Delta Epsilon, The International Honor Society in Economics. For more than five decades, Omicron Delta Epsilon self-published the journal using a variety of university presses and contract printers to physically produce and distribute the journal to members of the society, individual subscribers, and libraries around the world. Its deep red cover and distinctive title wordmark became iconic symbols within the economics profession. Although the size and format of the journal evolved over time, the journal was produced only in a hardcopy format—until this issue. With Volume 61, Number 1, Spring 2016, The American Economist enters the digital age of journal publication…

Omicron Delta Epsilon recently celebrated its 100th birthday and The American Economistrecently passed the 50th anniversary of its association with the honor society. As we move past these important milestones and into the digital future, it is fitting that we take the time to look back on the journal’s valuable legacy. This issue opens with a bibliographic history of The American Economist that chronicles the journal’s path from a student-edited and student-produced annual publication into a well-respected academic journal with a global readership. The history is followed by the republication of 12 classic articles from the journal’s backfile. These curated articles were selected to provide readers with a feel of The American Economist’s rich heritage of publishing original work by some of the world’s most prominent economists. Papers by Milton Friedman, Paul Samuelson, John Kenneth Galbraith, Robert Solow, and Elinor Ostrom are included here, among others. Each article opens with a new Editor’s Introduction to set the paper and the author into its proper context.

In honor of the impressive legacy of The American Economist, we

are pleased to present a special collection of articles from the journal that we written by Nobel Peace Prize winning authors. You can read the special collection from The American Economist free for the next 30 days by clicking here.

To read the March 2016 special issue, also free for the next 30 days, click here. Want to know all about the latest research from The American Economist? Click here to sign up for e-alerts!