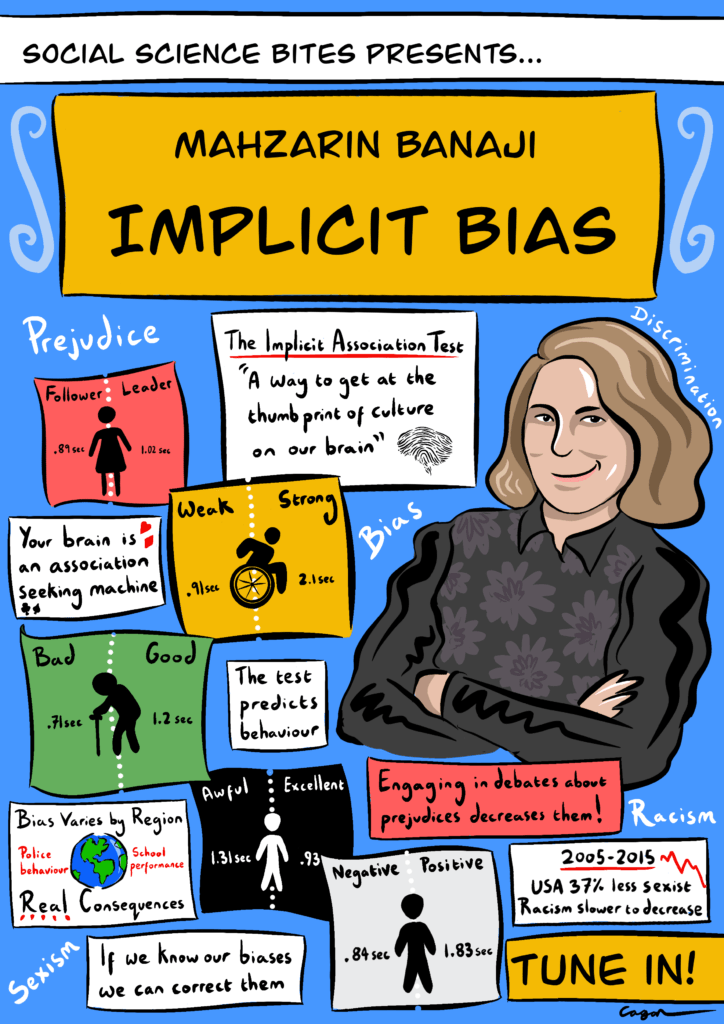 This illustration is the first in a series of Social Science Bites illustrations by scientific illustrator Alex Cagan. We’ve looked through our archives and chosen some of our favorite episodes from over the years, which Alex has brought to life in these visualizations. We’ll be unveiling new illustrations in this series through June and July 2020 on our Twitter page. Catch each new illustration as it’s released at the hashtag #SSBillustrated.

Explicit statements of prejudice are less common than in the past (even if they are still easily found). “I see that as a mark of progress,” says social psychologist Mahzarin R. Banaji, the Richard Clarke Cabot Professor of Social Ethics at Harvard University. But peer a little below the surface, she adds, “even though you might reject an explicit bias, you actually have the implicit version of it.”

“The brain is an association-seeking machine,” she tells interviewer David Edmonds in this Social Science Bites podcast. “It puts things together that repeatedly get paired in our experience. Implicit bias is just another word for capturing what those are when they concern social groups.

“So, when I see that my mom puts out butter when she puts out bread, the two are associated in some way. But I also see other things in the world. I see as I walk down the street who the poor people are and who the rich people are, and where the one lives and where the other lives.”

Banaji explains her work on implicit bias and the efforts she and her colleagues made in creating the widely recognized implicit association test, or IAT, which helps ferret out this “thumbprint of the culture on our brain.” (See and take the test here.)

That thumb imprints on Banaji herself. She relates a time when she was scheduled for surgery and just assumed the young woman next to her wouldn’t be her anesthesiologist and must instead be a nurse – even though Banaji if asked would readily say that young women absolutely could be any sort of doctor. Still, she asked the “nurse” to relay a message to the anesthesiologist, only to learn the “nurse” was the anesthesiologist. “As I always tell my students when I came back from surgery, these stereotypes are not good for us: you do not want to be in surgery with an angry anesthesiologist working on you!”

She credits the genesis of the IAT with a “stroke of genius” by her colleague Anthony Greenwald (with whom she wrote 2013’s Blindspot: Hidden Biases of Good People). “It’s based on the idea that two things that are routinely thought of as linked together will be easier to pair as a result, while things that aren’t commonly – or ever — linked will require longer to pair them. The pairing in the initial implicit association test was with a deck of cards that include four suites – two with sets of faces, dark- and light-skinned, and two with words, positive and negative. In the classic result, test-takers can pair the white faces with positive words faster, as they can the peoples of color faces with negative words. Switch it up – people of color with good words, say – and there’s a measurable delay. It’s also been applied to many societal concerns, such as biases related to gender, body size, age, sexuality, and others.

The IAT has shown some predictive power about how biases translate into action in individuals, but it’s no ‘test for racism,’ she stresses.

Banaji’s contributions to society have been widely recognized in a number of notable fellowships, such as the Society for Experimental Psychologists, Society for Experimental Social Psychology, the American Academy of Arts and Sciences, the American Academy of Political and Social Science, and in 2016, the Association for Psychological Science’s (APS) William James Fellow Award for lifetime contributions to the basic science of psychology. (She was president of APS in 2010-11.)

2 weeks ago
1052
Communication
Watch the Video: What’s Next for #AcademicTwitter?

This was a great show! I am so happy you are producing this series. I look forward to each one. Glad to learn more about implicit bias.

2 weeks ago
1052
Communication
Watch the Video: What’s Next for #AcademicTwitter?